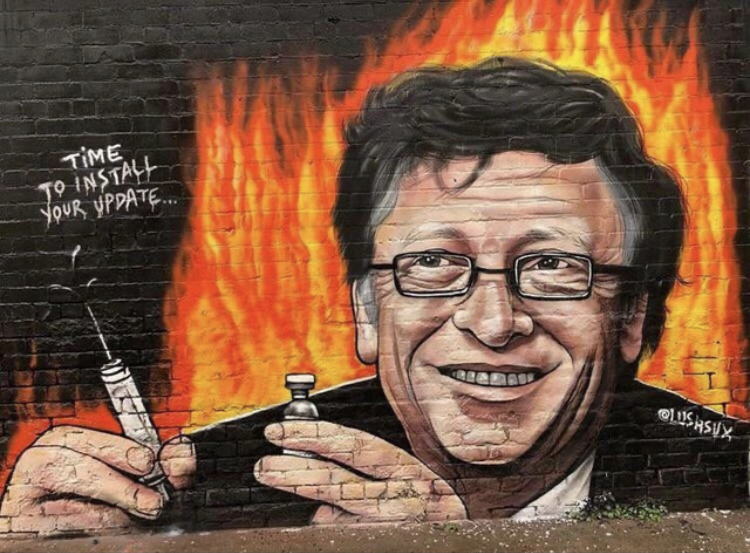 Who is Bill Gates? A software developer? A businessman? A philanthropist? A global health expert? This question, once merely academic, is becoming a very real question for those who are beginning to realize that Gates’ unimaginable wealth has been used to gain control over every corner of the fields of public health, medical research and vaccine development. And now that we are presented with the very problem that Gates has been talking about for years, we will soon find that this software developer with no medical training is going to leverage that wealth into control over the fates of billions of people.

The transformation of William Tyler Gates III from ruthless computer tycoon monopolist into benevolent global philanthropist is a primary instance of unbridled power exercised by the one speaking to the many. In November 1999 U.S. federal judge Thomas Penfield Jackson ruled Microsoft Corp exercised monopoly power in the market for personal computer operating systems. Following years of legal battles, and taking a page from other magnates-turned-altruists like John D. Rockefeller, over the past 20 years Bill Gates has rebranded himself as the benevolent benefactor of humanity. Employing the vehicle of the Bill & Melinda Gates Foundation, he has more than doubled his net worth from $50 billion to over $110 billion in just the past ten years.

This past May an in-depth four-part series titled Who Is Bill Gates? was produced by The Corbett Report (mp3s here). With meticulous sourcing for every statement, it ranged across the areas of

Part 1 lays out the enormous influence on consensus reality exercised thru funding media by the Bill & Melinda Gates Foundation.

And, like Rockefeller, Gates’ transformation has been helped along by a well-funded public relations campaign. Gone are the theatrical tricks of the PR pioneers—the ubiquitous ice cream cones of Gates’ mentor Warren Buffett are the last remaining holdout of the old Rockefeller-handing-out-dimes gimmick. No, Gates has guided his public image into that of a modern-day saint through an even simpler tactic: buying good publicity. 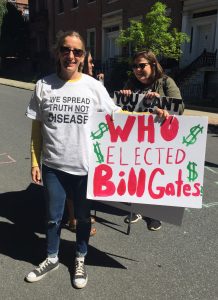 When the NewsHour with Jim Lehrer was given a $3.5 million Gates foundation grant to set up a special unit to report on global health issues, NewsHour communications chief Rob Flynn was asked about the potential conflict of interest that such a unit would have in reporting on issues that the Gates Foundation is itself involved in. “In some regards I guess you might say that there are not a heck of a lot of things you could touch in global health these days that would not have some kind of Gates tentacle,” Flynn responded.

Indeed, it would be almost impossible to find any area of global health that has been left untouched by the tentacles of the Bill & Melinda Gates Foundation.

It was Gates who sponsored the meeting that led to the creation of Gavi, the Vaccine Alliance, a global public-private partnership bringing together state sponsors and big pharmaceutical companies, whose specific goals include the creation of “healthy markets for vaccines and other immunisation products.” As a founding partner of the alliance, the Gates Foundation provided $750 million in seed funding and has gone on to make over $4.1 billion in commitments to the group.

The history of Bill Gates influence on media coverage of global health is revelatory in its assessment of how a person with no medical training or regulatory experience aggressively buys the kind of medical science “reporting” that furthers the goals of this proven monopolist.

One of the core funding areas for the Gates Foundation is “vaccine development and surveillance”. In 2010 the Gates-founded “Decade of Vaccines” project [Bill and Melinda Gates Pledge $10 Billion in Call for Decade of Vaccines, Press Release, | Bill & Melinda Gates Foundation, January 2010] committed $10 billion in funding to implement a Global Vaccine Action Plan.[Decade of Vaccines — Global Vaccine Action Plan 2011-2020, Immunization, Vaccines and Biologicals, World Health Organization] As stated at the project’s launch:

The Global Vaccine Action Plan will enable greater coordination across all stakeholder groups – national governments, multilateral organizations, civil society, the private sector and philanthropic organizations – and will identify critical policy, resource, and other gaps that must be addressed to realize the life-saving potential of vaccines…. Prof. Pedro Alonso, Director for the Institute for Global Health of Barcelona and Dr. Christopher Elias, President and CEO of PATH, have been appointed co-chairs of the Steering Committee and the Secretariat. “Vaccines are miracles,” said Prof. Alonso, “For just a few dollars per child, vaccines prevent disease and disability for a lifetime. We must make sure that people understand that vaccines are one of the best investments in health.”

A comprehensive 2000 study by Johns Hopkins and the CDC published in Pediatrics concluded that the elimination of mortalities due to infectious diseases during the first half of the 20th century had nothing to do with vaccines and everything to do with what was in essence, an engineering solution: clean water and healthy food. According to World Health Organization Voluntary contributions in 2018, the Bill & Melinda Gates Foundation contributed $99+ million to the General Fund, the third largest contributor after the GAVI Alliance ($140+ million) and the United States ($132+ million).[Voluntary contributions by fund and by contributor, 2018, World Health Organization, 9 May 2019] As James Corbett points out, “It was Gates who sponsored the meeting that led to the creation of Gavi, the Vaccine Alliance, a global public-private partnership bringing together state sponsors and big pharmaceutical companies, whose specific goals include the creation of ‘healthy markets for vaccines and other immunisation products.’ As a founding partner of the alliance, the Gates Foundation provided $750 million in seed funding and has gone on to make over $4.1 billion in commitments to the group.”[Corbett Report: How Bill Gates Monopolized Global Health]

Given this, an obvious question is what epic purpose motivates and drives Bill Gates actions? Apparently not money as he certainly has enough of that. In April, Robert F. Kennedy, Jr. posited the following regarding what makes Bill go? “Vaccines, for Bill Gates, are a strategic philanthropy that feed his many vaccine-related businesses (including Microsoft’s ambition to control a global vaccination ID enterprise) and give him dictatorial control of global health policy. Gates’s obsession with vaccines seems to be fueled by a conviction to save the world with technology.”[Gates’ Globalist Vaccine Agenda: A Win-Win for Pharma and Mandatory Vaccination, Robert F. Kennedy, Jr., Children’s Health Defense, 9 Apr 2020]

Utilizing the device of a cartoon format to great effect, Willy G.’s Dystopian Future’s one-and-only offering on his goo-goo-tube channel is the 12 May 2020 production of BGPuppetShot. A transcript provides sources to some of what Cartoon Bill shares. Abragini84 left a succinct comment (among the 7+K) summing up Cartoon Bill’s statements: “These where by far the most honest 3 minutes and 46 seconds of Bill’s life.” While for some this may seem preposterous, Willy G. has done his homework in an effective and informative manner.

Hello useless eaters. As your unqualified, non-elected global human health overlord, I’d like to take this opportunity to flaunt my position of power and influence over society and share some of my plans for you and your future.

When I amassed my fortune in computer software I demonstrated that I was willing to lie, steal code, cheat my partners, and exercise monopolistic control to destroy my competitors.

Now that I’ve retired I can rebrand myself as a humanitarian. With my for-profit foundation masquerading as a charity, I can advocate for population reduction and sponsor mass human experiments with unproven vaccines in vulnerable populations.[A][B]

Like my father a powerful banker, eugenicist, and Rockefeller crony himself, it’s always been my ambition to decide who lives and more importantly how many have to die.

Whether it’s under the guise of climate change or world health it’s really all about controlling and culling the human herd for fun and profit.

In November [October] of last year I hosted Event 201, a war game simulation of a global pandemic. Leaders from private corporations, global banks, governments, and the media got together to strategize ways they could align in lockstep when responding to a worldwide health crisis. Using a coordinated campaign of fear-mongering, intimidation, social shaming, and economic blackmail, we realized that we could get around dangerous philosophies like individual liberty and national sovereignty. With an obedient population we would be free to implement our own top-down solutions like forced quarantines, social distancing, contact tracing, and mandatory testing as a means to seize technocratic control of society.

Now imagine my excitement when we had the opportunity to release—uh declare our own global pandemic. It was my chance to look like the Nostradamus of public health and to position myself, and business partners like Dr. Fauci, as the de facto authorities on response and solutions.

Through exaggerated doomsday scenarios and computer simulations,[A][B] our petty control freaks instituted harsh rules and draconian lockdowns. Even after our dire predictions proved false, scared and well-meaning people continued to submit to the arbitrary and foolish demands of their so-called leaders.

Having achieved global lockdown and medical martial law, we will continue to hold hostage your ability to congregate, work, travel or do just about anything until we’re prepared to roll out our bigger plan.

I’d like to call this pandemic one because believe me we have others in the works. Our final solution is to have you begging for us to vaccinate, tag, and digitally track each one of you like livestock.

Not only will my foundation enjoy legal immunity and trillions and profits but these mandatory experimental vaccines move us so much further down the road to absolute centralized global control. If only my good friend Jeffrey Epstein had been here to celebrate with me aboard the Lolita Express.

So remember global citizens, this will end when I say it ends. Could be a year, maybe two years, maybe never. I guarantee that if we have our way it will be at least until you’re not able to do anything to stop it. Just surrender your personal freedom and common sense to our fear merchants in government and the media because none of this works unless you all go along with it. Now if you’ll excuse me I’m off to do some augmented reality spirit cooking with Marina Abramovich[A][B]. Bye now.