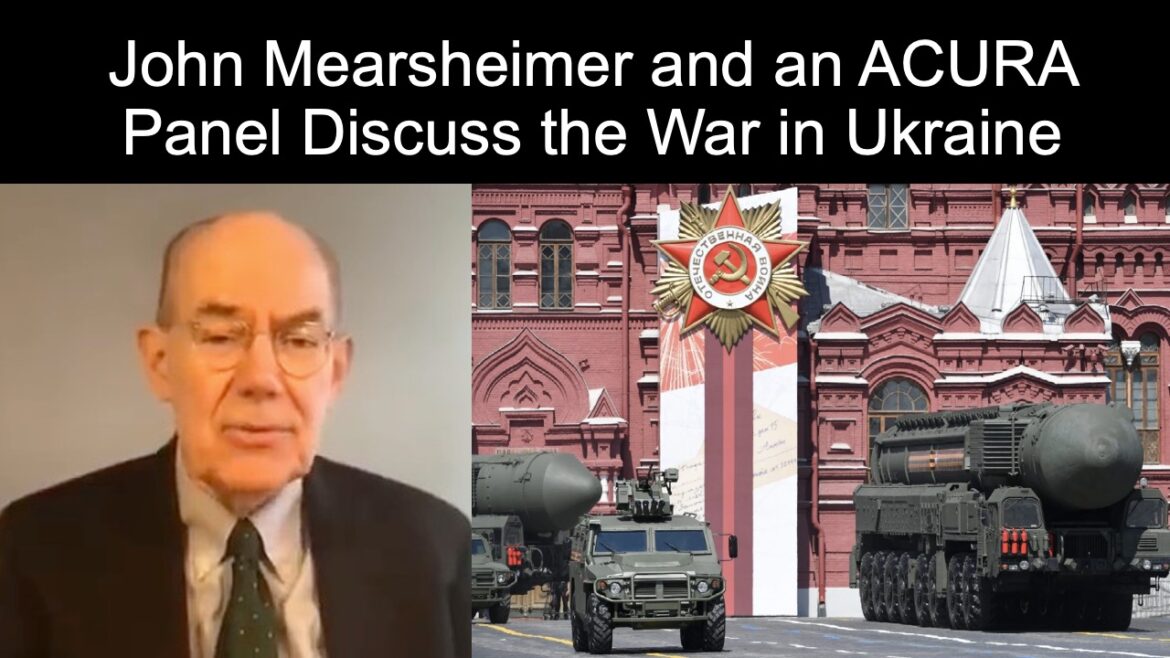 On April 7th the American Committee for US-RUSSIA ACCORD (ACURA) hosted Professor John J. Mearsheimer of the University of Chicago in conversation with ACURA members Katrina vanden Heuvel, former Russian Ambassador Jack Matlock, Professor Nicolai Petro, and Professor Marlene Laruelle on Why The West’s Strategy in Ukraine Is So Dangerous.  The 1-hour, 9-minute film covers the critical analysis necessary to apprehend the fundamental dynamics of what has caused and led to the current situation in Ukraine.  The film, with summary, mp3s, sources, and transcript excerpts is at: https://ratical.org/ratville/JFK/MearsheimerUkraine.html.

In January 2018 I received a number of recommendations from Marty “History Will Not Absolve Us” Schotz, focused on the accelerating new Cold War between the U.S. and Russia including Johnson’s Russia List and analysis by historian Stephen Cohen (Rest In Peace, 1938-2020).

In March 2015 Cohen, professor emeritus of politics at Princeton University and professor emeritus of Russian studies and history at New York University, spoke at the annual US-Russia Forum in Washington, DC, and in April published an expanded version of his remarks in “Why We Must Return to the US-Russian Parity Principle – The choice is either a New Détente or a more perilous Cold War.” Cohen wrote the following introductory paragraph seven years ago:

When I spoke at this forum nine months ago, in June 2014, I warned that the Ukrainian crisis was the worst US-Russian confrontation in many decades. It had already plunged us into a new (or renewed) Cold War potentially even more perilous than its forty-year US-Soviet predecessor because the epicenter of this one was on Russia’s borders; because it lacked the stabilizing rules developed during the preceding Cold War; and because, unlike before, there was no significant opposition to it in the American political-media establishment. I also warned that we might soon be closer to actual war with Russia than we had been since the Cuban Missile Crisis of 1962.

John J. Mearsheimer is the R. Wendell Harrison Distinguished Service Professor of Political Science at the University of Chicago, where he has taught since 1982. In 2014, Foreign Affairs published his essay: “Why the Ukraine Crisis Is the West’s Fault, The Liberal Delusions That Provoked Putin”.

Katrina vanden Heuvel is President of the American Committee for US-RUSSIA ACCORD.  In her April 7th introduction to Professor Mearsheimer, she described how he has “been receiving some 1,000 emails a day which I think speaks to the interest in, perhaps not agreeing with Professor Mearsheimer but hearing a different point of view, an alternative point of view, a counter to what we hear on our screens and on our computers. It’s very important to have that debate.” She went on to express the critical importance of “that alternative point of view which is missing in our media and politics.”

Professor Mearsheimer begins by noting that, “what we have here is a war between the United States and Russia and there’s no end in sight.” “Hubris” from the Greek hybris “wanton violence, insolence, outrage,” is cited as causing the downfall of ancient Athens. The Encyclopedia Britannica states the term as meaning “the intentional use of violence to humiliate or degrade. The word’s connotation changed over time, and hubris came to be defined as overweening presumption that leads a person to disregard the divinely fixed limits on human action in an ordered cosmos.”

In his April 7th remarks, Professor of Political Science Nicolai Petro spoke briefly about Tragedy and International Relations theory, highlighting three general characteristics: “the loss of the ability to communicate, the loss of a common legal framework, and the loss of shared values.” The third loss is especially toxic:

Our third tragedy has a rather long and distinguished pedigree. I am referring to the fruits of the poisoned tree of American exceptionalism, which causes many Americans to emphasize the values that divide us from the rest of the world, rather than the many interests that we share. This is what has transformed us from a mere nation state, into an all-judging Nation Church that, as Andrew Bacevich has pointed out, unites primarily to worship at the altar of American Greatness.  Since 2003, American officials have consistently chastised Russia for her “breach of values,” but make no mistake—other states are never far behind.

In the present circumstance our greatest need is to renew the ability to communicate, to truly listen and exchange points of view to perceive a greater range of perspective and understanding.  Professor Petro addresses this in his evaluation of our current impasse of engaging in genuine dialogue:

The loss of the ability to communicate precludes dialogue. Indeed many politicians and diplomats no longer understand what dialogue means. They think it means indicating what one wants to the other party. But that is what a prison warden does to his inmates. In fact, the logos in dialogos means “to gather together” and is sometimes rendered as “relationship.” The famous opening line of the Gospel according to St. John could thus be read: “In the beginning was the Relationship …”

The proper objective of dialogue is not a momentary accord, but a profound self-transformation that establishes a new relationship with the Enemy. Classical Greek tragedy is thus, quintessentially, a series of dialogues in which we expose our own tragic flaws to ourselves. This exposure is meant to bring about catharsis—a purging of the soul that restores healthy perspective by removing hatred. Our reluctant willingness to sign technical agreements with other countries, while emphasizing our values disagreements with them, is the exact opposite of dialogue.

Our most basic need today is a profound self-transformation that establishes a new relationship with the Enemy. Projection of our own tragic flaws onto “the other” will continue to increase the tension and possibility of an inexorable slide into oblivion for all of eternity.

The U.S. narrative promoting hatred of the Enemy as the source of all evil and criminal intent—broadcast 24/7 by government officials, mainstream and many so-called alternative media—is an indicator of the supremely dangerous war propaganda pushing all life on Mother Earth over the brink and into the abyss of nuclear extinction. If the dire warnings of souls including Cohen, Mearsheimer, and Petro—exercising their intelligence and intuitive wisdom with clarity and coherence—are not heeded, Martin Luther King’s understanding, spoken on the eve of his assassination, will be our species’ epitaph:

Men for years now have been talking about war and peace. Now no longer can they just talk about it. It is no longer a choice between violence and non-violence in this world, it is non-violence or non-existence.

Grateful to be present at this unique rite-of-passage moment in our species’ creative evolutionary adaptation into our post-industrial-mind epoch.

For the children, all our other than human kin, and all that follow us here,
Dave Ratcliffe

“Respect the Earth as our Mother and have a Sacred Regard for All Living Things.”
Steven Newcomb, Toward a Paradigm Change for Mother Earth (2015)