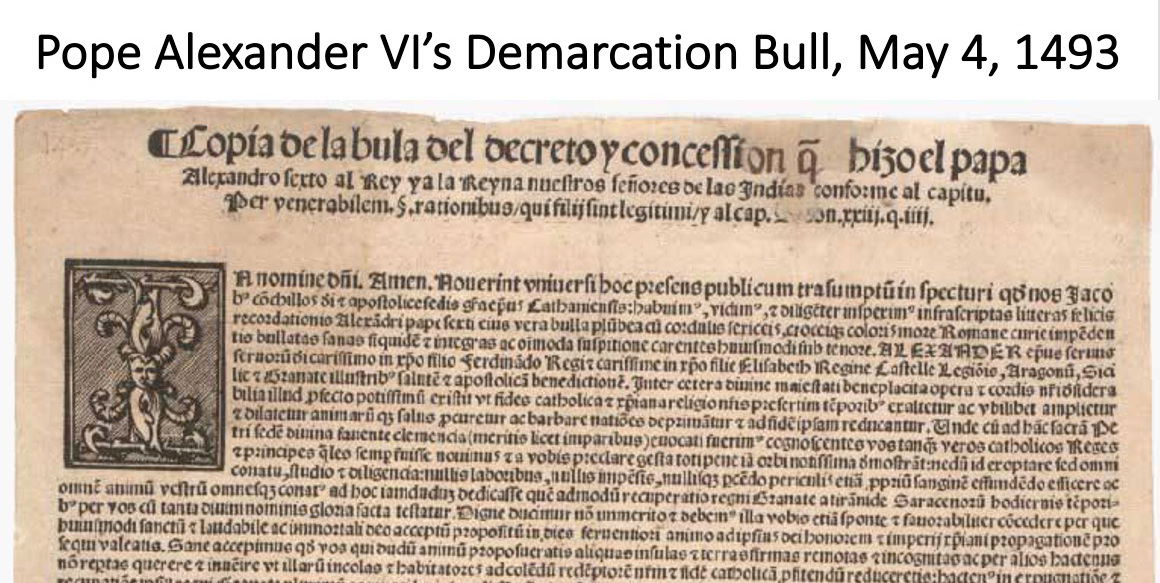 When Christopher Columbus first set foot on the white sands of Guanahani island, he performed a ceremony to “take possession” of the land for the king and queen of Spain, acting under the international laws of Western Christendom. Although the story of Columbus’ “discovery” has taken on mythological proportions in most of the Western world, few people are aware that his act of “possession” was based on a religious doctrine now known in history as the Doctrine of Discovery. Even fewer people realize that today – five centuries later – the United States government still uses this archaic Judeo-Christian doctrine to deny the rights of Native American Indians.

Origins of the Doctrine of Discovery

To understand the connection between Christendom’s principle of discovery and the laws of the United States, we need to begin by examining a papal document issued forty years before Columbus’ historic voyage In 1452, Pope Nicholas V issued to King Alfonso V of Portugal the bull Romanus Pontifex, declaring war against all non-Christians throughout the world, and specifically sanctioning and promoting the conquest, colonization, and exploitation of non-Christian nations and their territories.

Under various theological and legal doctrines formulated during and after the Crusades, non-Christians were considered enemies of the Catholic faith and, as such, less than human. Accordingly, in the bull of 1452, Pope Nicholas directed King Alfonso to “capture, vanquish, and subdue the saracens, pagans, and other enemies of Christ,” to “put them into perpetual slavery,” and “to take all their possessions and property.” [Davenport: 20-26] Acting on this papal privilege, Portugal continued to traffic in African slaves, and expanded its royal dominions by making “discoveries” along the western coast of Africa, claiming those lands as Portuguese territory.

Thus, when Columbus sailed west across the Sea of Darkness in 1492 – with the express understanding that he was authorized to “take possession” of any lands he “discovered” that were “not under the dominion of any Christian rulers” – he and the Spanish sovereigns of Aragon and Castile were following an already well-established tradition of “discovery” and conquest. [Thacher:96] Indeed, after Columbus returned to Europe, Pope Alexander VI issued a papal document, the bull Inter Cetera of May 3, 1493, “granting” to Spain – at the request of Ferdinand and Isabella – the right to conquer the lands which Columbus had already found, as well as any lands which Spain might “discover” in the future.

In the Inter Cetera document, Pope Alexander stated his desire that the “discovered” people be “subjugated and brought to the faith itself.” [Davenport:61] By this means, said the pope, the “Christian Empire” would be propagated. [Thacher:127] When Portugal protested this concession to Spain, Pope Alexander stipulated in a subsequent bull – issued May 4, 1493 – that Spain must not attempt to establish its dominion over lands which had already “come into the possession of any Christian lords.” [Davenport:68] Then, to placate the two rival monarchs, the pope drew a line of demarcation between the two poles, giving Spain rights of conquest and dominion over one side of the globe, and Portugal over the other. 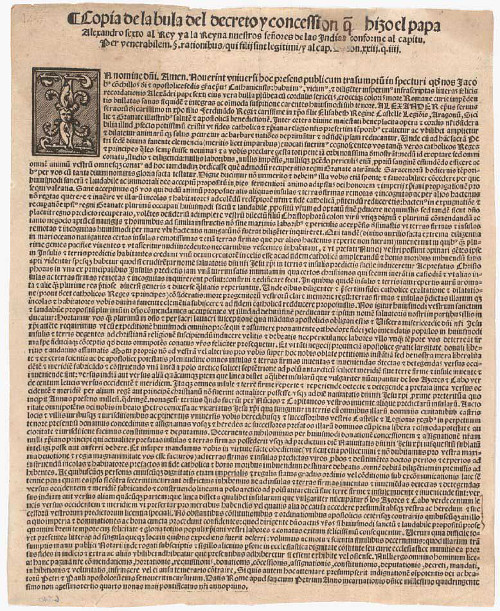 PHOTO: GILDER LEHRMAN COLLECTION
Copy of Pope Alexander VI’s Demarcation Bull, May 4, 1493. Cristóbal Colón returned to Palos, Spain on March 15, 1493. Less than two months later Alexander VI issued the Bull Inter Caetera.The Bull stated that any land not inhabited by Christians could be “discovered,” claimed, and controlled by Christian rulers. This doctrine of Christian discovery laid the basis of all European claims to lands in the Western Hemisphere and authority to dominate and subjugate all Nations, Peoples, and Communities therein. In time this doctrine became the foundation of U.S. expansion and federal Indian law.

During this quincentennial of Columbus’ journey to the Americas, it is important to recognize that the grim acts of genocide and conquest committed by Columbus and his men against the peaceful Native people of the Caribbean were sanctioned by the abovementioned documents of the Catholic Church. Indeed, these papal documents were frequently used by Christian European conquerors in the Americas to justify an incredibly brutal system of colonization – which dehumanized the indigenous people by regarding their territories as being “inhabited only by brute animals.” [Story:135-6]

The lesson to be learned is that the papal bulls of 1452 and 1493 are but two clear examples of how the “Christian Powers,” or “different States of Christendom,” viewed indigenous peoples as “the lawful spoil and prey of their civilized conquerors.” [Wheaton:270-1] In fact, the Christian “Law of Nations” asserted that Christian nations had a divine right, based on the Bible, to claim absolute title to and ultimate authority over any newly “discovered” Non-Christian inhabitants and their lands. Over the next several centuries, these beliefs gave rise to the Doctrine of Discovery used by Spain, Portugal, England, France, and Holland – all Christian nations.

The Doctrine of Discovery in U.S. Law

In 1823, the Christian Doctrine of Discovery was quietly adopted into U.S. law by the Supreme Court in the celebrated case, Johnson v. McIntosh (8 Wheat., 543). Writing for a unanimous court, Chief Justice John Marshall observed that Christian European nations had assumed “ultimate dominion” over the lands of America during the Age of Discovery, and that – upon “discovery” – the Indians had lost “their rights to complete sovereignty, as independent nations,” and only retained a right of “occupancy” in their lands. In other words, Indians nations were subject to the ultimate authority of the first nation of Christendom to claim possession of a given region of Indian lands. [Johnson:574; Wheaton:270-1]

According to Marshall, the United States – upon winning its independence in 1776 – became a successor nation to the right of “discovery” and acquired the power of “dominion” from Great Britain. [Johnson:587-9] Of course, when Marshall first defined the principle of “discovery,” he used language phrased in such a way that it drew attention away from its religious bias, stating that “discovery gave title to the government, by whose subject, or by whose authority, the discovery was made, against all other European governments.” [Johnson:573-4] However, when discussing legal precedent to support the court’s findings, Marshall specifically cited the English charter issued to the explorer John Cabot, in order to document England’s “complete recognition” of the Doctrine of Discovery. [Johnson:576] Then, paraphrasing the language of the charter, Marshall noted that Cabot was authorized to take possession of lands, “notwithstanding the occupancy of the natives, who were heathens, and, at the same time, admitting the prior title of any Christian people who may have made a previous discovery.” [Johnson:577]

In other words, the Court affirmed that United States law was based on a fundamental rule of the “Law of Nations” – that it was permissible to virtually ignore the most basic rights of indigenous “heathens,” and to claim that the “unoccupied lands” of America rightfully belonged to discovering Christian European nations. Of course, it’s important to understand that, as Benjamin Munn Ziegler pointed out in The International Law of John Marshall, the term “unoccupied lands” referred to “the lands in America which, when discovered, were ‘occupied by Indians’ but ‘unoccupied’ by Christians.” [Ziegler:46]

Ironically, the same year that the Johnson v. McIntosh decision was handed down, founding father James Madison wrote: “Religion is not in the purview of human government. Religion is essentially distinct from civil government, and exempt from its cognizance; a connection between them is injurious to both.”

Most of us have been brought up to believe that the United States Constitution was designed to keep church and state apart. Unfortunately, with the Johnson decision, the Christian Doctrine of Discovery was not only written into U.S. law but also became the cornerstone of U.S. Indian policy over the next century.

From Doctrine of Discovery
to Domestic Dependent Nations

The myth of U.S. “plenary power” over Indians – a power, by the way, that was never intended by the authors of the Constitution [Savage:115-17] – has been used by the United States to:

The above cases are just a few examples of how the United States government has used the Johnson v. McIntosh and Cherokee Nation v. Georgia decisions to callously disregard the human rights of Native peoples. Indeed, countless U.S. Indian policies have been based on the underlying, hidden rationale of “Christian discovery” – a rationale which holds that the “heathen” indigenous peoples of the Americas are “subordinate to the first Christian discoverer,” or its successor. [Wheaton:271]

As Thomas Jefferson once observed, when the state uses church doctrine as a coercive tool, the result is “hypocrisy and meanness.” Unfortunately, the United States Supreme Court’s use of the ancient Christian Doctrine of Discovery – to circumvent the Constitution as a means of taking Indian lands and placing Indian nations under U.S. control – has proven Madison and Jefferson right.

In a country set up to maintain a strict separation of church and state, the Doctrine of Discovery should have long ago been declared unconstitutional because it is based on a prejudicial treatment of Native American people simply because they were not Christians at the time of European arrival. By penalizing Native people on the basis of their non-Christian religious beliefs and ceremonial practices, stripping them of most of their lands and most of their sovereignty, the Johnson v. McIntosh ruling stands as a monumental violation of the “natural rights” of humankind, as well as the most fundamental human rights of indigenous peoples.

As we move beyond the quincentennial of Columbus’ invasion of the Americas, it is high time to formally renounce and put an end to the religious prejudice that was written into U.S. law by Chief Justice John Marshall. Whether or not the American people – especially the Christian right – prove willing to assist Native people in getting the Johnson ruling overturned will say a lot to the world community about just how seriously the United States takes its own foundational principles of liberty, justice, and religious freedom.

As we approach the 500th anniversary of the Inter Cetera bulls on May 3 and 4 of 1993, it is important to keep in mind that the Doctrine of Discovery is still being used by countries throughout the Americas to deny the rights of indigenous peoples, and to perpetuate colonization throughout the Western Hemisphere. To begin to bring that system of colonization to an end, and to move away from a cultural and spiritual tradition of subjugation, we must overturn the doctrine at its roots. Therefore, I propose that non-Native people – especially Christians – unite in solidarity with indigenous peoples of the Western Hemisphere to impress upon Pope John Paul II how important it is for him to revoke, in a formal ceremony with indigenous people, the Inter Cetera bulls of 1493.

Revoking those papal documents and overturning the Johnson v. McIntosh decision are two important first steps toward correcting the injustices that have been inflicted on indigenous peoples over the past five hundred years. They are also spiritually significant steps toward creating a way of life that is no longer based on greed and subjugation. Perhaps then we will be able to use our newfound solidarity to begin to create a lifestyle based on the first indigenous principle: “Respect the Earth and have a Sacred Regard for All Living Things.”

Davenport, Frances Gardiner, 19l7, European Treaties bearing on the History of the United States and its Dependencies to 1648, Vol. 1, Washington, D.C.: Carnegie Institution of Washington.

Steve Newcomb is an American Indian of Shawnee & Lenape ancestry. For decades, he has studied the origins of United States federal Indian law and international law dating back to the early days of Christendom. His book, Pagans In the Promised Land: Religion, Law, and the American Indian, was published in 2008 (Fulcrum Publishing: Golden, CO; find it in libraries or for purchase).