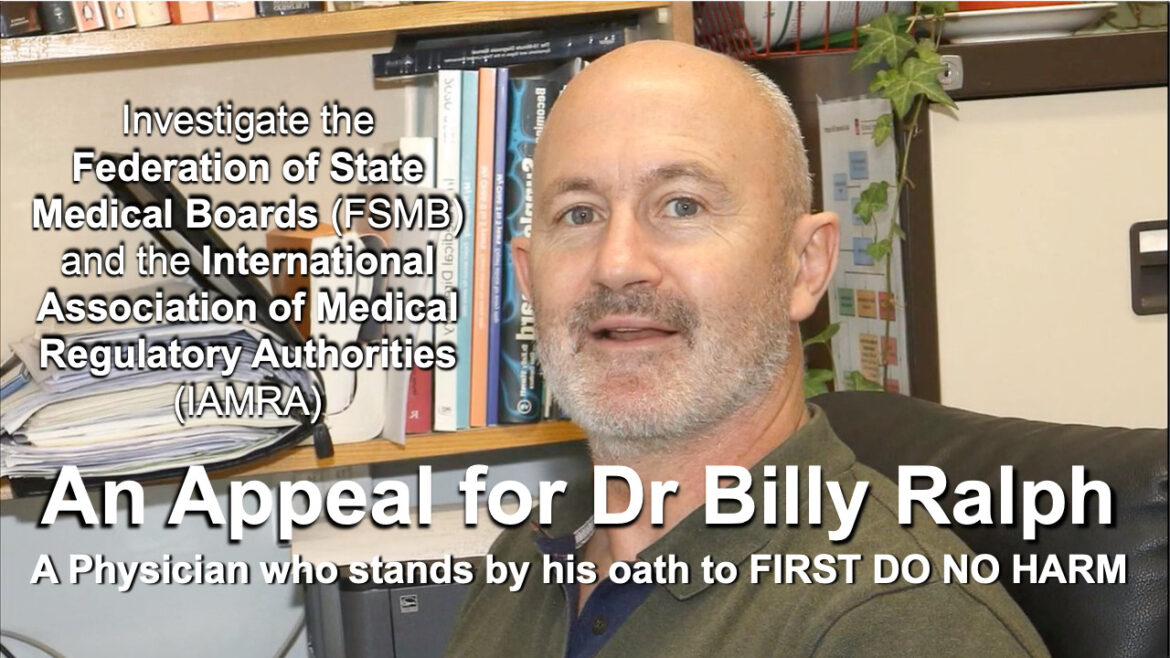 Today I received a copy of this post on Global Research by my supremely dear friend, Dr. Emanuel Garcia which is reproduced and enhanced below.

To all who read this: Uncover and expose Who Funds the Federation of State Medical Boards and the International Association of Medical Regulatory Authorities? At the core—as Dr. Garcia frames it,

The outstanding question remains: Where does the FSMB derive its authority to regulate United States medical boards and, through its apparent international partner, the IAMRA, direct medical councils around the world to discipline doctors?

Before now I had not heard of either the FSMB nor the IAMRA. It would appear that the source of their combined authority merits hyper-focused scrutiny, exposure, ripping away the veil, and calling out. I am not a lawyer nor trained in medicine. I am simply a member of our single, supremely precious human family becoming evermore desperate to find ANY of the keys that unlock the doors breaking the spell of the weasels seeking to force our family into a gruesome digital dark age.

The other day I received a link to this video, an appeal on behalf of an Irish General Practitioner, Dr. William Ralph, who is currently under investigation by the Medical Council of Ireland. I learned of Dr. Ralph’s plight through his niece, Dr. Karen McDonnell, a psychiatrist who is on the verge of losing her job in New Zealand (where, incidentally there is a tremendous dearth of psychiatrists) because she refuses to receive a third Pfizer inoculation, thanks to New Zealand’s ill-considered and scientifically unfounded inoculation mandates for health practitioners.

Dr. Ralph apparently had the temerity to be a good and decent GP, one who urged caution in the face of the relentless push to jab everyone in sight for an illness which, untreated, had low lethality and which, if treated, had virtually none. He respected his patients’ wishes to make their own decisions about medical interventions, he provided them with informed consent not only about the COVID inoculations but also about the consequences of the non-pharmacotherapeutic ‘health’ measures imposed, such as masking and social isolation, and he made home visits to those who did not have the wherewithal to travel for help. He provided those patients suffering from COVID with actual care, in opposition to the mystifying governmental health directives that provided none until a patient was so ill as to require hospitalization, at which point the measures then offered were detrimental if not dangerous. As a result his practice, from 2020 through 2022, grew by approximately a thousand new patients.

To any thinking physician there is no mystery that people would flock to a doctor who honored his profession by adherence to very basic medical tenets:

4) to engage in healthful activities such as exercise, nutrition, and

For these ‘sins’ Dr. Ralph is now under scrutiny by the Medical Council of Ireland, the organizational body charged with upholding medical standards and protection of the public weal, and his license to practice is in jeopardy.

Unfortunately Dr. Ralph is not alone.

Here in New Zealand a plethora of like-minded physicians have been hounded and persecuted by our Medical Council for these very same issues. Licenses have been suspended and revoked and virtually every physician who has dared to question directives that have mandated inoculations and actively suppressed attempts to treat people who had contracted COVID has come under attack.

But we are fighting back.

I obtained my medical degree from the University of Pennsylvania in 1986 (and at the same time I was inducted into the Alpha Omega Alpha Honor Medical Society). The education I received there was an education in critical thinking and clinical wisdom. Drugs and procedures come and go with the times, but the ability of a physician to glean from the complexities of a presenting illness and its effect on a patient a mode of healing, using knowledge and experience and respecting a patient’s uniqueness, is the hallmark of good medical practice.

Since 2020 this kind of medical practice, this kind of sensible and ethical medical approach, has been subverted and wholly undermined. Honest medical councils that should have encouraged and honored the likes of Dr. Ralph have instead betrayed the profession whose ideals they claim to uphold.

An answer may lie in Texas, of all places, where the headquarters of two little known but connected organizations sit: the Federation of State Medical Boards and the International Association of Medical Regulatory Authorities, which share the very same address near Dallas: 400 Fuller Wiser Road, Euless, TX 70039.

Recently Dr. Richard Amerling, Associate Medical Director of America’s Frontline Doctors, responded to a statement from the FSMB alleging that providing ‘misinformation’ about the COVID jab should result in disciplinary action against physicians. Dr. Amerling wrote that “Decertification for speaking out in favor of early outpatient treatment of COVID-19, or calling into question the monolithic vaccine narrative, is a gross abuse of authority and will generate a strong legal response.”

The outstanding question remains: Where does the FSMB derive its authority to regulate United States medical boards and, through its apparent international partner, the IAMRA, direct medical councils around the world to discipline doctors?

The FSMB is not a government agency. Founded in 1912, it appears to be a private entity that has accrued its power in ways that are essentially unknown. It is high time for a bona fide investigation of this agency, an investigation into its finances, its corporate status and its paymasters. In many ways it is akin to another non-governmental agency that has wielded immense power and was founded in 1913: the Federal Reserve.

In 59 BC, were a Roman peasant to voice concerns about the alliance of Caesar, Crassus and Pompey to create a hegemonic rule over the Republic, he would not have been considered a ‘conspiracy theorist’; he would instead have been describing generally accepted reality.

In casting an eye over the years since the dramatic introduction of the COVID pandemic, the near total shutdown of the world, the immense transfer of wealth from the middle and poorer classes upwards, the universal imposition of an inadequately tested so-called vaccine, and the vehement suppression of critical early treatment, one cannot but conclude that there is indeed an agenda beyond health and welfare. The FSMB and the IAMRA have shown by their actions that they are tools whose task is to further this agenda, and that this agenda is both anti-medical and inhumane.

Dr. Garcia is a Philadelphia-born psychoanalyst and psychiatrist who emigrated to New Zealand in 2006. He has authored articles ranging from explorations of psychoanalytic technique, the psychology of creativity in music (Mahler, Rachmaninoff, Scriabin, Delius), and politics. He is also a poet, novelist and theatrical director. He retired from psychiatric practice in 2021 after working in the public sector in New Zealand.

Dr Billy Ralph is currently under investigation by the Medical Council as a result of views he expressed regarding Covid-19 and its treatments.

Please write to the Medical Council using the template below, to express your disdain at this investigation.  Link to template letter: https://ratical.org/PandemicParallaxView/mp3s/DrWilliamRalphLetterToMedicalCouncil.docx

The Irish Council for Human Rights is a non-profit, non-governmental organisation, incorporated in November 2020. The ICHR was established to strengthen and promote human rights and civil liberties in Ireland.

Tracey O’ Mahony is an Irish lawyer registered on the Roll of Practising Barristers held by the Legal Services Regulatory Authority, and is the founder and a director of the ICHR.

This channel (at https://www.youtube.com/channel/UC2TVSCwWPQQscAqFlFWRIDw) will discuss issues around Freedom, Democracy and Justice.

Auto-generated text transcript:
0:01
hi everyone
0:02
dr billy ralph is under investigation by
0:05
the medical council of ireland as a
0:06
result of views he has expressed
0:08
regarding covet 19 and its treatment
0:10
since march of 2020
0:12
you might ask what crime has given rise
0:14
to this investigation
0:16
well the answer is simple
0:18
billy refused to accept that the science
0:21
was settled regarding covert 19 and its
0:23
treatments and continued to ask
0:25
questions both publicly and privately
0:28
within the medical community prior to
0:30
march of 2020 science progressed indeed
0:34
flourished through rigorous debate and
0:36
the attempt at establishing the validity
0:38
of a hypothesis through peer review and
0:40
the process of falsification
0:43
this in
0:57
doctors were prepared to suffer the
0:58
wrath of the medical council the media
1:01
and the government
1:02
however dr billy ralph chose to stand
1:05
tall and publicly express his desire to
1:08
pursue other beneficial treatments for
1:10
the sick by engaging in curiosity and
1:12
argumentation
1:14
many of you may not be aware that
1:15
billy’s practice grew considerably
1:17
between the years 2020 to 2022 when
1:20
approximately 1 000 extra patients
1:23
applied to join his practice
1:25
make no mistake that many of those
1:27
patients sought billy out not only for
1:30
treatment but to escape the demonization
1:33
and constant badgering they were
1:35
persistently subjected to by other
1:37
medical professionals to take the
1:39
experimental injection
1:41
if anything the medical council should
1:43
be investigating those doctors who
1:45
pursued dogma instead of science and who
1:49
valued financial gain over the interests
1:51
of their patients
1:53
the purpose of this video is to ask you
1:55
to write to the medical council to
1:57
express your disdain and deep
1:59
disappointment towards this
2:00
investigation
2:02
and with this in mind we have drafted a
2:04
template letter that you can use or
2:06
adapt
2:07
you will find this template letter at
2:08
the link below or in the description box
2:10
to this video
2:12
to make this campaign as effective as
2:14
possible we are asking that you please
2:16
post the letter to the medical council
2:18
as opposed to emailing it
2:20
we are also asking that you send a copy
2:22
of the letter by email to the irish
2:24
times rte your local tds and anyone else
2:27
you feel should be aware of this
2:28
investigation
2:30
many of the doctors who spoke out over
2:32
the past two years have come under
2:34
severe pressure to be silent and have
2:36
suffered great reputational damage as a
2:39
result of their refusal
2:40
they are the men and women who risked
2:42
their licence their livelihoods and in
2:45
many cases their help to treat those of
2:47
us who were rejected by our own doctors
2:50
will you now stand with them in their
2:52
time of need
2:53
thanks for listening