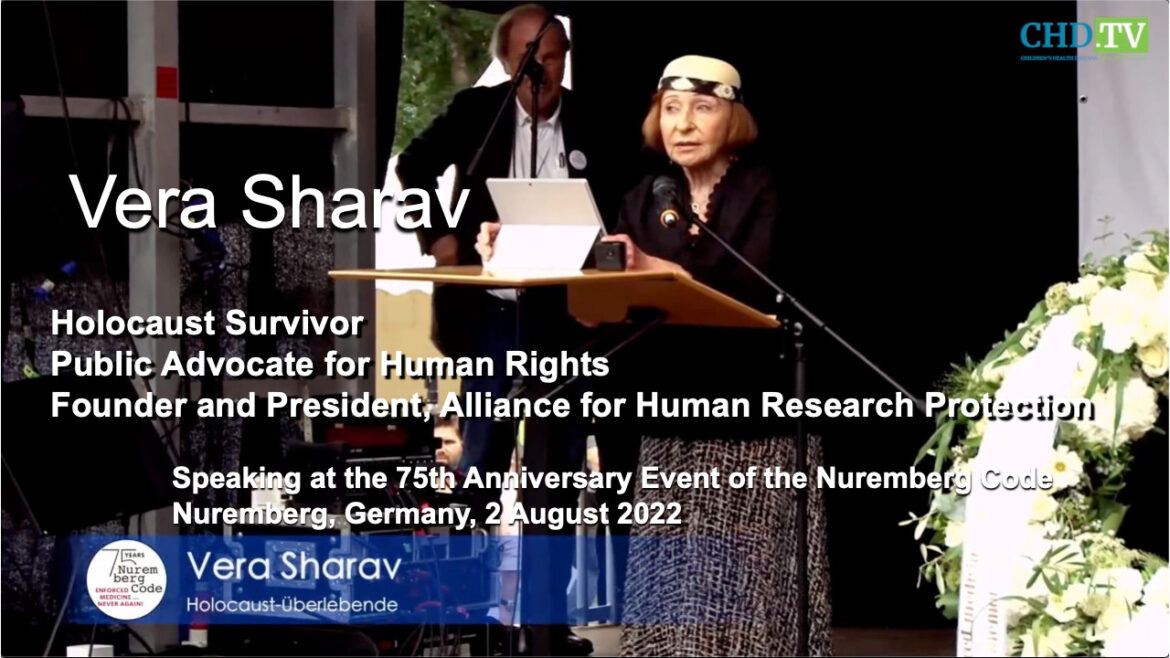 I came to Nuremberg to provide historical context to the current global threat confronting our civilization. These past 2 1⁄2 years have been especially stressful— as painful memories were rekindled.

We were herded into a concentration camp – essentially left to starve. Death was ever-present. My father died of typhus when I was five.

In 1944, as the Final Solution was being aggressively implemented, Romania retreated from its alliance with Nazi Germany. The government permitted several hundred Jewish orphans under the age of 12 to return to Romania. I was not an orphan; my mother lied to save my life.

I boarded a cattle car train – the same train that continued to transport Jews to the death camps – even as Germany was losing the war.

Four years elapsed before I was reunited with my mother.

The Holocaust serves as the archetypal symbol of unmitigated evil

– Moral norms & human values were systematically obliterated.
– The Nazi system destroyed the social conscience.
– Millions of people were worked to death as Slave laborers.
– Others were abused
as experimental human guinea pigs.

The Holocaust did not begin in the gas chambers of Auschwitz and Treblinka.
The Holocaust was preceded by 9 years of incremental restrictions on personal freedom, & the suspension of legal rights and civil rights.

The stage was set by fear-mongering & hate-mongering propaganda.

A series of humiliating discriminatory government edicts demonized Jews as “spreaders of disease.” We were compared to lice.

The real viral disease that infected Nazi Germany is Eugenics— Eugenics is the elitist ideology at the root of all genocides.

– Eugenics is cloaked in a mantle of pseudo- science.
– It was embraced by the academic & medical establishment as well as the judiciary — in Germany and the United States.
– Eugenicists justify social & economic inequality.
They legitimize discrimination, apartheid, sterilization, euthanasia, and genocide. The Nazis called it “ethnic cleansing” — for the protection of the gene pool.
Medicine was perverted from its healing mission & was weaponized.
First, it was to control reproduction through forced sterilization; then it was to eliminate those deemed to be “sub-human” —Untermenschen. The first victims of medical murder were 1,000

German disabled infants and toddlers. This murderous operation was expanded to an estimated 10,000 children up to age 17.
The next victims were the mentally ill; they were followed by the elderly in nursing homes. All of these human beings were condemned as “worthless eaters”.
Under Operation T-4, designated hospitals became killing stations where various extermination methods were tested – including Zyclon B — the gas that was used in the death camps.

The objective of the Nazi Final Solution was to annihilate the entire 11 million Jewish Population of Europe as quickly and efficiently as possible.
The Nazis enacted discriminatory laws; they utilized modern technology; low-cost industrial methods; an efficient transportation system; & a highly trained bureaucracy that coordinated the industrial genocidal process. The objective was high speed, maximum efficiency at lowest cost.

The human casualties of this unprecedented genocide were 6 million Jews & 9 million other people whom the Nazis dehumanized as Untermenschen.
The purpose of Holocaust memorials is to warn and inform future generations about how an enlightened, civilized society can be transformed into a genocidal universe ruled by absolute moral depravity.
If we are to avert another Holocaust, we must identify ominous current parallels before they poison the fabric of society.
Since the Nazi era, the study of history & most of the humanities—including philosophy, religion, and ethics — have been overshadowed by an emphasis on utilitarian science & technology.
As a result, few people recognize foreboding similarities between current policies & those under the Nazi regime.
By declaring a state of emergency—in 1933 & in 2020, constitutionally protected personal freedom, legal rights, and civil rights were swept aside. Repressive, discriminatory decrees followed.

In 1933, the primary target for discrimination were Jews; today, the target is people who refuse to be injected with experimental, genetically engineered vaccines. Then and now, government dictates were crafted to eliminate segments of the population.

The media is silent – as it was then.
The media broadcasts a single, government-dictated narrative – just as it had under the Nazis. Strict censorship silences opposing views.
In Nazi Germany few individuals objected; those who did were imprisoned in concentration camps.

Today, doctors & scientists who challenge the approved narrative are maligned; their reputations trashed. They risk losing their license to practice as well as having their homes & workplace raided by SWAT teams.

The moral significance of the Nuremberg Code cannot be overstated:

The Nuremberg Code is the most authoritative, internationally recognized document in the history of medical ethics.

This landmark document was formulated in response to the evidence of medical atrocities committed by Nazi physicians and scientists.

The Nuremberg Code rejects the ideology of Eugenics & unequivocally asserts the primacy & dignity of the individual human being – as opposed to “the greater good of society.”

American jurists who formulated the Nuremberg Code incorporated the official 1931 German “Guidelines for Human Experimentation” authored by Dr. Julius Moses. Those Guidelines remained legally in force until 1945. The Nazis violated them in their entirety. Dr. Moses, who was Jewish, was deported to Theresienstadt where he died.

These human rights apply to every human being.

– The Code sets limits on the parameters of permissible medical experiments.
– Equally important, the Nuremberg Code holds doctors and research investigators personally responsible to ensure the human subjects’ safety & to ensure that the person freely gave his voluntary, fully informed consent. The standards of the Nuremberg Code are incorporated in the International Criminal Code. They are legally applicable today in peacetime & during war.

The objective of the Nuremberg Code is to ensure that medicine, never again deviates from the precautionary ethical principle, “First, do no harm.”

The Nuremberg Code has served as a blueprint for subsequent national and international codes of human rights – to ensure that:
– the rights & dignity of human beings are upheld;
– & to ensure that medical doctors never again engage in morally abhorrent experiments.
– Like the 10 Commandments, not a word of the Code may ever be changed.

The first of 10 ethical principles lays down the foremost ethical requirement – which is spelled out in great detail:

“The voluntary consent of the human subject is absolutely essential”.

“This means that the person involved should have legal capacity to give consent; should be so situated as to be able to exercise free power of choice, without the intervention of any element of force… constraint or coercion; and should have sufficient knowledge & comprehension of the elements of the subject matter involved as to enable him to make an understanding and enlightened decision. This… requires that before the acceptance… of an affirmative decision by the experimental subject… [he] should be [informed of] the nature, duration, and purpose of the experiment; the method and means by which it is to be conducted; all inconveniences & hazards reasonably to be expected; and the effects upon his health or person which may possibly come from his participation in the experiment.
The duty and responsibility for ascertaining the quality of the consent rests upon each individual who initiates, directs or engages in the experiment. It is a personal duty & responsibility which may not be delegated to another with impunity.”

The genocidal culture that permeated the Nazi regime did not end in 1945. It metastasized in the United States.

At the end of the war, US government agents helped 1,600 high ranking Nazi scientists, doctors, & engineers to evade justice at Nuremberg.

These Nazi technocrats facilitated the murderous Nazi operations. They were Hitler’s partners in crimes against humanity. They were secretly smuggled into the US under Operation Paperclip. This was in violation of explicit orders by President Harry Truman. These Nazi criminals were placed in high-level positions at major American scientific & medical institutions where they continued their work.

What’s more, these Nazi technocrats trained a generation of American scientists, doctors, & engineers.
This is how Nazi methods, & the immoral disregard for human values were entrenched in America.

In 1961, in his farewell address to the nation, President Dwight Eisenhower warned against the increasing dominance of “the military-industrial complex” whose “total influence – economic, political, even spiritual – is felt [everywhere]”

Eisenhower warned: “we must be alert to the danger that public policy could itself become the captive of a scientific-technological elite.”

In 1979, a report to the President, by the US Commission on the Holocaust, chaired by Auschwitz survivor Elie Wiesel warned:
“…the inclination to duplicate the Nazi option and once again to exterminate millions of people remains a hideous threat.”

The Nuremberg Code has served as the foundation for ethical clinical research since its publication 75 years ago.

The Covid pandemic is being exploited as an opportunity to overturn the moral and legal parameters laid down by the Nuremberg Code.

The Nuremberg Code is our defense against abusive experimentation.

Humanity is currently under siege by the global heirs of the Nazis.

They have embarked on implementing a diabolical agenda:
– Overthrow democracy & Western civilization;
– Depopulate the global population;
– Eliminate nation-states & establish One World Government;
– Eliminate cash & establish one digital currency;
– Inject digital IDs & artificial intelligence capabilities into every Human being. If these objectives become a reality, we will be digitally surveilled 24 hours a day, 7 days a week.

In May 2022, at the World Economic Forum in Davos, Klaus Schwab, the architect of the dystopian Great Reset declared:
“Let’s be clear, the future is not just happening; the future is built by us, a powerful community here in this room. We have the means to impose the state of the world.”

The ultimate goal of these megalomaniacs is to gain total control of the worlds’ natural resources, financial resources and to replace humans with Transhuman robots.

[1] Transhumanism is a bio-tech- enhanced caste system – the New Eugenics.

Harari refers to humans as “hackable animals” He declared: “We have the technology to hack humans on a massive scale…”

Transhumanists despise human values, & deny the existence of a human soul. Harari declares that there are too many “useless people.” The Nazi term was “worthless eaters”

This is the New Eugenics.
It is embraced by the most powerful global billionaire technocrats who gather at Davos: Big Tech, Big Pharma, the financial oligarchs, academics, government leaders & the military industrial complex. These megalomaniacs have paved the road to another Holocaust.

This time, the threat of genocide is Global in scale.

This time instead of Zyklon B gas, the weapons of mass destruction are genetically engineered injectable bioweapons masquerading as vaccines.

This time, there will be no rescuers. Unless All of Us Resist, Never Again is Now.

It was almost 75 years ago that the city of Nuremberg was the place of a historic declaration. When the judges of the military tribunal against leading medical officers in the Nazi administration passed their verdict, they issued what would become known as the Nuremberg Code.On August 20, a compelling line-up of international speakers traveled to Nuremberg to commemorate the 75th Anniversary of The Nuremberg Code. Now of all times, in its jubilee year, this achievement of mankind is facing the greatest hardship since it was written.