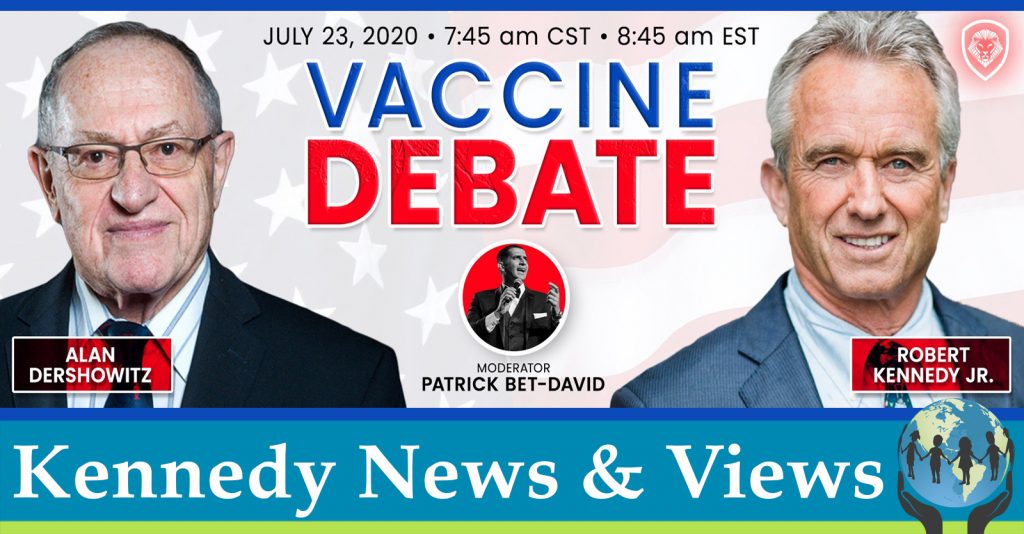 Robert F. Kennedy, Jr. serves as President of Waterkeeper Alliance, as well as Founder, Chairman of the Board, and Chief Legal Counsel for Children’s Health Defense. For more than a decade he has sought to debate vaccine safety with an advocate for vaccination including Peter Hotez, Paul Offit, and Ian Lipkin. No one would agree to debate him. This summer attorney and Constitutional lawyer Alan Dershowitz agreed and the discussion was held on July 23, moderated by Patrick Bet-David.

Dr. Edward Kass who was head of Harvard Medical School at that time who gave a very very famous speech in which he warned that people who were promoting vaccines and other technologies would try to take credit for those reductions in mortalities from infectious disease and he said beware of them because they’ll try to monetize them and use that to increase their power and their prestige….

The problem is Anthony Fauci put 500 million dollars—of our dollars—into that vaccine. He owns half the patent. He has five guys working for him, We’re entitled to collect royalties from that. So you have a corrupt system and now they’ve got a vaccine that is too big to fail. Instead of saying Hey this was a terrible terrible mistake. They’re saying we are going to order 2 billion doses of this.

You’ve got to understand Alan, with these Covid vaccines, these companies are playing with house money. They’re not spending anything on it and they have no liability. So if they kill 20 people or 200 people, 2,000 people in their clinical trials, big deal. They have zero liability. And guess what? They’ve wasted money—your money—because we’re giving them the money to play with. People like me and people in our community are looking at this process and we’re saying whatever comes out of that process we don’t want to take it because we’re seeing how the sausage gets made. And it’s really sickening. No medical product in the world would be able to go forward with the profile that Moderna has….

You raised a bunch of questions. One is, the opiate people got busted Alan—and by the way, no, they were not moral people. They knew what they were doing. They’re killing 56,000 American young kids a year knowing what they were doing. More kids every year than were killed in the 20-year Vietnam War. These are not moral companies and they only got busted because plaintiff’s attorneys could sue them and they got the discovery documents and walked them down to the U.S. Attorney’s office and said, Hey there’s criminal behavior here. That can never happen in the vaccine space. You can’t sue them. There’s no discovery. There’s no depositions. There’s no class action suit. There’s no multi-district litigation. There’s no interrogatories. Nothing. They never get caught.

Now these four companies, that make all of our vaccines, all 72 of the vaccine shots that are now mandated for our children, every one of them is a convicted serial felon: Glaxo, Sanofi, Pfizer, Merck. In the past 10 years—just in the last decade—those companies have paid 35 billion dollars in criminal penalties, damages, and fines for lying to doctors, for defrauding science, for falsifying science, for killing hundreds of thousands of Americans knowingly and getting away with it.

The two attorneys debated a range of issues including vaccine mandates, the PREP Act, the lack of vaccine safety studies, Jacobson vs. Massachusetts, and HHS’s failure to act on provisions of the National Childhood Vaccine Injury Act as well as raising questions on Are compulsory vaccines even legal? Should any government be able to force medical procedures on families?

Early in the debate Mr. Kennedy described how the belief that smallpox and polio were eradicated by vaccination is controversial. He pointed out how these and other infectious diseases “all disappeared at the same time without vaccination.”

Now CDC actually examined that because it became such a part of the orthodoxy of vaccines, the idea that smallpox and polio were abolished because of vaccines and these other diseases. Johns Hopkins and CDC in 2000 did a comprehensive study of that proposition. The study was published in Pediatrics which is the Journal for the American Association of Pediatrics which is kind of a readout fortification for vaccine orthodoxy. It’s a publication very very friendly in support of vaccination….

The conclusion of that study is that the abolishment of mortalities from infectious diseases that took place during the first half of the 20th century had virtually nothing to do with vaccines. It had everything to do with sanitation, with nutrition, with hygiene, with electric refrigerators, with reduction in population densities, essentially an engineering solution: clean water, good food. [See Immunization Graphs, Raymond Obomsawin M.Sc., Ph.D., 2009, and Vaccines Did Not Save Us – 2 Centuries of Official Statistics, Child Health Safety, 2010.] And actually there was a guy called Dr. Edward Kass who was head of Harvard Medical School at that time who gave a very very famous speech [Infectious Disease and Social Change, Journal of Infectious Diseases, Vol. 123, No. 1 (Jan., 1971)] in which he warned that people who were promoting vaccines and other technologies would try to take credit for those reductions in mortalities from infectious disease and he said beware of them because they’ll try to monetize them and use that to increase their power and their prestige.

Beginning at 51:06, Mr. Kennedy touched on the corrupting influence of financial profit compromising the integrity and professed duty of U.S. public health agencies:

FDA gets 50 percent of its budget from vaccine companies, from the industry. 50 percent.[1] The CDC has an $11.5 billion budget and 4.9 billion of that is buying and selling and distributing vaccines. CDC is a vaccine company. It owns 57 vaccine patents[2] so it can make money on every sale of a vaccine. NIH owns hundreds of vaccine patents.[3] NIH owns half the patent for the Moderna vaccine. There’s five individuals in NIH and the rules at NIH is if you’re a scientist or an official who worked on a vaccine, you’re allowed to collect $150,000 a year in royalties on sales that that vaccine makes.[4] These regulatory agencies are actually vaccine companies.[5] The vaccine marketing sales part of those agencies is the tail that is now wagging the regulatory dog.