Many luminous souls have inspired this one’s passage along the journey. Beginning in 1993, working with Dr. John Gofman and Egan O’Connor, Chairman and Executive Director respectively, of the Committee for Nuclear Responsibility provided nonpareil instruction in the runaway train corruption of medical science in collaboration with corporate plus military governing structures concerning the health effects of man-made radioactive matter on the biosphere and all Life.

With the advent of the coronavirus that swept the world off it’s collective feet last month, I wish to highlight the work of Dr Peter Gøtzsche, another stellar medical scientist whose intelligence and integrity shine a piercing light on the medical malfeasance practiced by the pharmaceutical industry. This is critically relevant to understand today as the current crisis being managed by Public Health Officials has the potential to override all other elements of the democratic process including freedom of speech and open and inclusive debate.

Peter C Gøtzsche graduated as a Master of Science in biology and chemistry in 1974 and as a physician 1984. He is a specialist in internal medicine; worked with clinical trials and regulatory affairs in the drug industry 1975-1983, and at hospitals in Copenhagen 1984-95. With about 80 others, he co-founded the Cochrane Collaboration in 1993 (the founder is Sir Iain Chalmers), and established the Nordic Cochrane Centre the same year. He became professor of Clinical Research Design and Analysis in 2010 at the University of Copenhagen and has been a member of the Cochrane Governing Board twice. He writes at Deadly Medicines and Organized Crime and founded the Institute for Scientific Freedom in 2019. 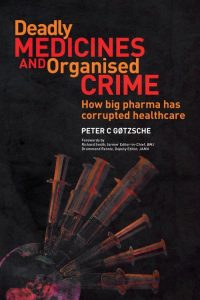 Gøtzsche wrote Deadly Medicines and Organised Crime: How Big Pharma Has Corrupted Healthcare (2013). As he describes it, “In 2012, I found out that the ten biggest drug companies in the world commit repeated and serious crimes to such a degree that they fulfill the criteria for organised crime under US law. I also found out how huge the consequences of the crimes are. They involve colossal thefts of public monies and they contribute substantially to the fact that our drugs are the third leading cause of death after heart disease and cancer.”

From the book’s Introduction:

The main reason we take so many drugs is that drug companies don’t sell drugs, they sell lies about drugs. This is what makes drugs so different from anything else in life… Virtually everything we know about drugs is what the companies have chosen to tell us and our doctors… the reason patients trust their medicine is that they extrapolate the trust they have in their doctors into the medicines they prescribe. The patients don’t realise that, although their doctors may know a lot about diseases and human physiology and psychology, they know very, very little about drugs that hasn’t been carefully concocted and dressed up by the drug industry… If you don’t think the system is out of control, then please email me and explain why drugs are the third leading cause of death… If such a hugely lethal epidemic had been caused by a new bacterium or a virus, or even one hundredth of it, we would have done everything we could to get it under control.

One of the contributors to the book’s Foreword is Richard Smith, Former Editor-in-Chief of the British Medical Journal (the other is Drummond Rennie, Deputy Editor, JAMA). About the book, Smith writes:

Most of Peter’s book is devoted to building up the case that the drug industry has systematically corrupted science to play up the benefits and play down the harms of their drugs.

As an epidemiologist with very high numerical literacy and a passion for detail, so that he is a world leader in critiquing clinical studies, Peter is here on very solid ground. He joins many others, including former editors of the New England Journal of Medicine, in showing this corruption.

He shows too how the industry has bought doctors, academics, journals, professional and patient organisations, university departments, journalists, regulators, and politicians.

These are the methods of the mob. 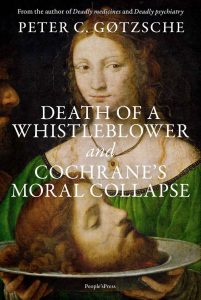 In his 2019 book, Death of a Whistleblower and Cochrane’s Moral Collapse (FILMS: 9 March 2019, Death of a whistleblower: scientific censorship in action (23:00); 8 June 2019, Death of a Whistleblower and Cochrane’s Moral Collapse (1:06:56), transcript), Gøtzsche documents institutional corruption in one of the world’s most venerated scientific institutions. John Ioannidis, a famed professor and medical researcher at Stanford, wrote a letter to the Danish Minister of Health condemning Gøtzsche’s dismissal from the Nordic Cochrane Centre: “Peter is undoubtedly a giant, one of the greatest scientists of our times … I believe that basic respect for scientific discourse requires that you do not eliminate your opponents through administrative machinations”. Additionally, 3,500 scientists and health-care professionals signed a letter in protest of Gøtzsche’s treatment. From a book review by Sami Timimi:

This book chronicles how an upside-down world is created when marketing triumphs over science; where the actual target of a years-long campaign of harassment gets labelled the guilty party. Professor Gøtzsche recounts in graphic detail the series of events that led to him being expelled from Cochrane in September 2018, followed by his dismissal from Rigshospitalet (the Danish National Hospital) in January, 2019. Gøtzsche’s compelling account includes quotes and documentation from written and oral sources, including transcripts of what was actually said in various meetings. The book stands as a detailed study in how organisations become corrupted unless they have carefully formulated processes that guard against anti-democratic forces taking control, once that organisation has been successful and reached a certain size. This is a book exposing how Cochrane fell into the clutches of a hierarchy more concerned with finances and marketing than the reasons it was created for. The death of its integrity, means that the most important institution left that could be trusted when it came to medical science, has disappeared down the same marketisation rabbit hole that captures so much of modern (so- called) medical science. Indeed it was because Professor Gøtzsche was prepared to call out the lowering of scientific standards in Cochrane that the hierarchy felt compelled to plot his demise.

Gøtzsche was one of the original co-founders of the Cochrane Collaboration (as it was then called) and has been a key player in developing it into a respected research network. He created many of the methodological tools used by Cochrane reviews and has never shied away from letting the data speak for itself, however unpopular the findings might be with some doctors, researchers, and in particular with pharmaceutical and other medical device manufacturers. Cochrane under the influence of Gøtzsche, and others like him, became known as a source of credible, reliable, and independent reviews, free from financial ties and commercial interests. The historical success of the Cochrane Collaboration meant that their work began to influence not only doctors’ practice but health policy too. As the Collaboration grew and new centres were established around the world, their work became important for establishing an evidence based approach to medicine; helping doctors understand what worked and to what degree, but just as importantly what didn’t work and what harms treatments may cause. It is these latter issues that meant that Gøtzsche was, and is, an inspiration to those of us who want medical practice to be as objective, free from bias, and safe as possible; but a threat to those who put commercial matters, marketisation, and image as their primary concern.

Gøtzsche’s brilliance and his fearless approach earned him many enemies. He is one of Denmark’s best-known researchers and is respected in research circles all over the world. But, for years he has documented how many products promoted by pharmaceutical industry and medical device manufacturers, can cause more harms than benefits; with detailed analysis of how the research from these companies misleads, obfuscates, or sometimes straightforwardly lies in order to protect and promote their products. He has shown how screening programmes (such as mammography), and certain vaccines can result in more harms for the public than benefits. His work on psychiatric drugs showing how poor they all are at delivering better lives for those who take them, at the same time as causing enormous harms to millions, has earned him the ire of the psychiatric establishment at large, including some Cochrane groups. The final nail in Gøtzsche’s coffin, came after his group published a devastating critique of a Cochrane review of the HPV vaccine, which had supported it as safe and effective. Gøtzsche’s group had access to far more data and came to a different and more critical conclusion about these vaccines. Thus, in this final straw for the Cochrane CEO and his henchmen, Gøtzsche had challenged both the powerful vaccine industry and other researchers in Cochrane. Instead of congratulating Gøtzsche for ensuring the integrity of the science produced by Cochrane, they began a challenge to this truth seeker for being “off message”.

This book carefully recounts this dark period in medical science where a once trusted institution carried out one of the worst show trials ever conducted in academia. The CEO and his collaborators went about their task in a manner that mirrors how the drug industry operates. Its employees are obliged to protect the sales of drugs and therefore cannot criticise the company&rsquo;s research publicly….

After his expulsion from Cochrane, through a majority vote of board members of only 6 against 5, with one abstention, a further four members of the board walked out in protest. Leading medical scientists from all over the world expressed their solidarity with Gøtzsche and outrage at what Cochrane had done. They universally praised Gøtzsche as a tireless advocate for research excellence, a fearless critic of scientific misconduct, and a powerful opponent of the corruption of research by industry interests, and criticised the unsupportable actions of Cochrane. History will recount this as the death of Cochrane rather than the whistleblower.

The CEO referred to above is Mark Wilson. As described in a critique by Alliance for Natural Health International:

For many, the downward spiral of the Cochrane Collaboration’s integrity began with the appointment of Mark Wilson as CEO in 2013, along with the changes the new CEO orchestrated. A grant of $1.15 million received from the Bill & Melinda Gates Foundation in 2016 may have signaled the final step in the corruption of what was until recently, for many, the bastion of scientific independence for clinical decision-making on the basis of so-called evidence-based medicine (EBM).

The influence of money man William Tyler Gates III—former computer-tycoon-monopolist turned benevolent-global-philanthropist—on medical science cannot be overstated. This month Children’s Health Defense Chairman Robert F. Kennedy, Jr. wrote about Gates’ Globalist Vaccine Agenda: A Win-Win for Pharma and Mandatory Vaccination leading off with,“Vaccines, for Bill Gates, are a strategic philanthropy that feed his many vaccine-related businesses (including Microsoft’s ambition to control a global vaccination ID enterprise) and give him dictatorial control of global health policy. Gates’ obsession with vaccines seems to be fueled by a conviction to save the world with technology.”

Dr Peter Gøtzsche unconditionally devotes his life to shining the stellar light of transparency onto an extremely powerful and a literal life-and-death industry that has put the pursuit of profit above morality, ethics, the Hippocratic Oath and all other considerations. Given the current upside world we now inhabit, it is of the utmost necessity that each of us in kind exercises our intelligence with clarity and coherence on behalf of our single, fragile, and supremely gifted human family.