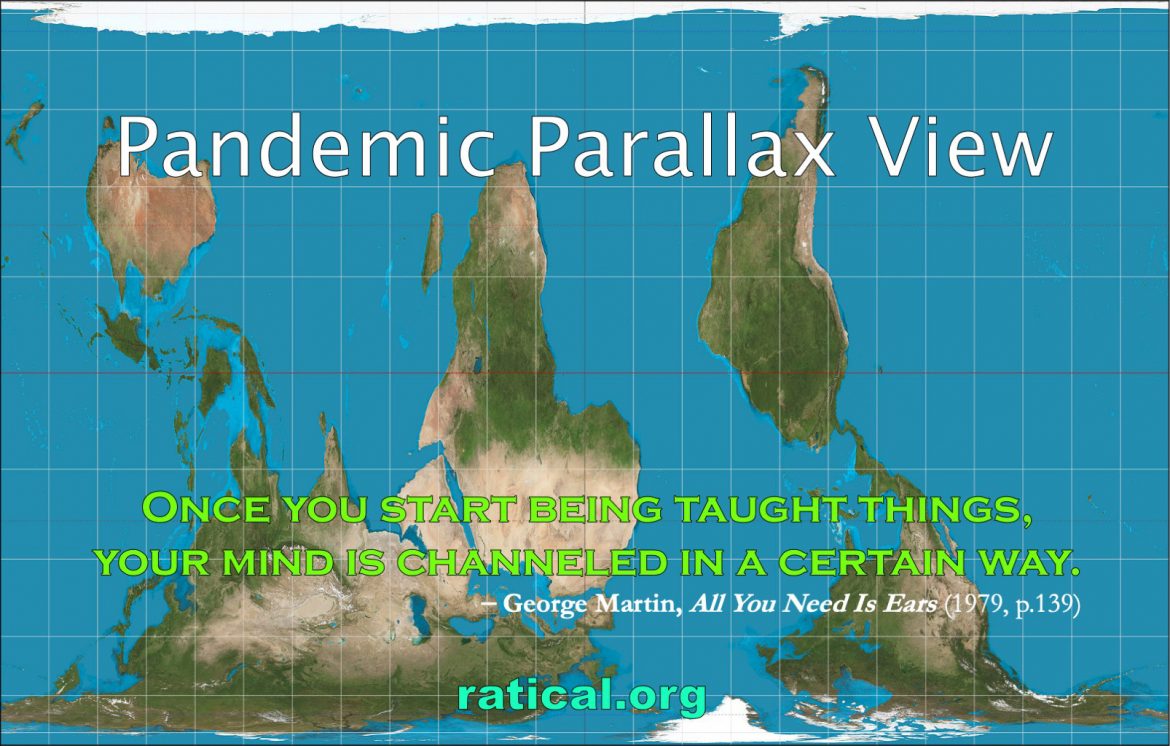 A group of correspondents convened in early April to evaluate and analyze the unfolding lockdown blanketing the world. Chronicling and archiving a shifted perspective, Pandemic Parallax View is a reflection of the group’s ongoing engagement. Focusing on the upside down world humanity has been dragged into, this correspondence is networking to broadcast and promote vital, Life-affirming critical thinking & analysis, research, reporting, as well as chronicling medical doctors experience and information being censored, distorted, ignored, denied, and dismissed by Foundation/Corporate/State-sponsored monetized media.

A brief timeline provides a skeleton chronology of how this project was launched .

On 3 April I wrote Al Rossi asking what he thought of titling this work, Pandemic Parallax View.  His response was encouraging:

I like it, because of the ambiguity of the first syntagma: adjective or noun? That is, does “pandemic” qualify “Parallax View” (A Parallax View which is spreading everywhere), or is it a noun in a three-part nominal phrase which means A Parallax View (of/whose subject is this) Pandemic? BOTH!

On 4 April I wrote the following to a small list:

Inaugurating v1.0 of Pandemic Parallax View (PPV)
PPV invites exercising our intelligence with clarity and coherence. The parallax view on this globally expanding situation is vital to the creative furtherance of the human project.

On 6 April I wrote to the following intellectual criminals inviting a correspondence to confer on Pandemic Parallax View: Ed Curtin, Emanuel Garcia, and John Kirby.

I originally titled PPV, “Best Before: mid April 2020”, thinking of the shelf life label that goes on perishable food. At the rate developments are advancing, I expect the copy we are seeing now will rapidly become “spoiled”. Nonetheless, for the purpose of archiving (for as long as the internet lasts), which is the mission of ratical.org, IF we still are “here” in a few years, such archiving will be a useful and instructive record of 11 September, The Sequel. What I would like to do is shift PPV from the top of ratical.org into its own file (first) and then directory (later). Of course, I don’t have any time for this. Yet, as John wrote about Murder Most Foul, “Act as we didn’t then.”

On 8 April, after including Libby Handros, Mark Crispin Miller, Joe Green, and a short list of equally independent minded souls, the group of correspondents was established.

Given the unprecedented Undiscovered Country humanity is now being pulled into, Pandemic Parallax View is established to provide  an archive of events unfolding from the apparent displacement of an observed object due to a change in the position of the observer.