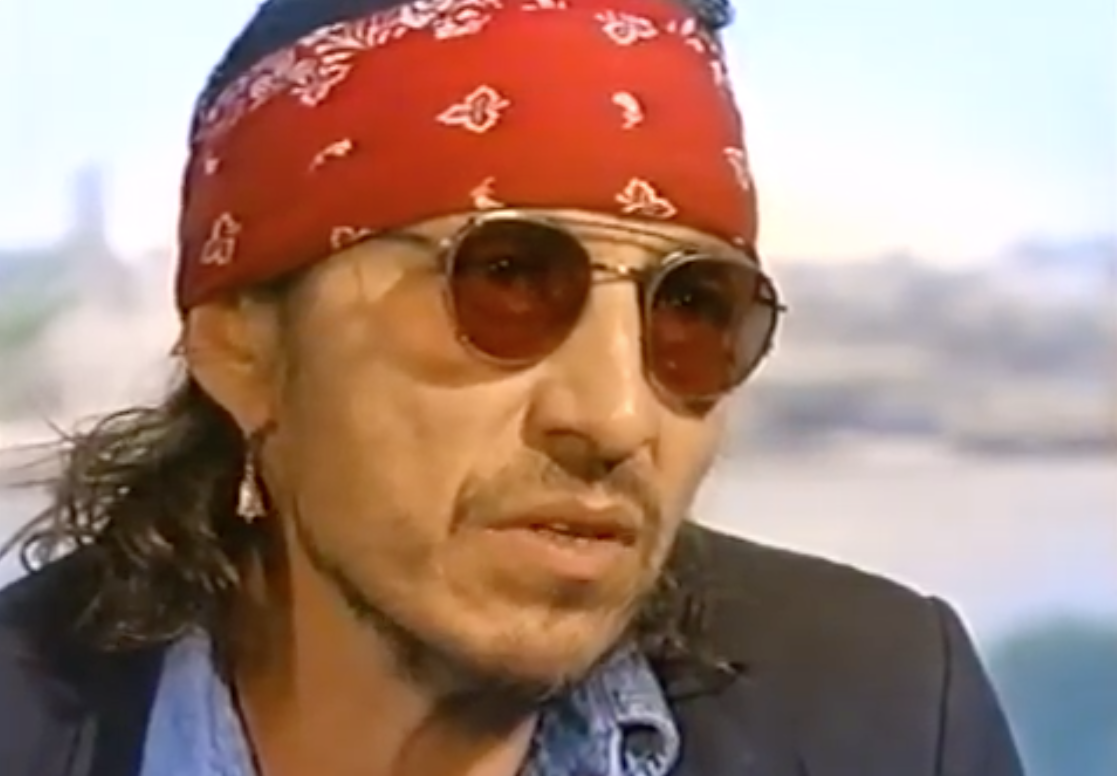 18 circles ’round the Sun ago John Trudell gave voice to Life’s wisdom and intelligence at the Women’s Building in San Francisco. A feeling of deep gratitude fills heart and mind, seeing more of the infinite mystery Life contains and expresses through all our relations. Almost six circles ’round the Sun ago, I drank in a recording of the spoken word that re-aligned and extended perception of Life’s gifts. In early 2015, the following transcript of John Trudell speaking in 2001 was crafted with the vital and essential help of rebecca lord. To a significant degree, it is because of her life path and relations that ratical.org encompasses the range of intelligence and wisdom contained within its 25 circles ’round the Sun.

John Trudell’s speaking and thinking covers a magnificent, wide dimension of ground. There is a wealth of understanding and insight to explore and consider about what he expresses. An essential point to keep in mind is that this expression comes from the oral tradition. The written word is different. The spoken word transmits awareness and understanding in a more comprehensive and integrated form. While the transcript is there, the most thorough way of taking this in is to listen.

Further, the way John Trudell speaks is compelling. The modulation and intonation of his voice—the way what he says is combined with how he says it—I find deeply fascinating and engaging. Hearing how his thoughts develop and progress and the way he works through what he wants to communicate weaves a rich, multi-dimensional tapestry of meaning and intelligence.

Included in his spoken word is poetry (some of which is published in the 2008 book, Lines from a Mined Mind) expressing understanding that includes how we perceive what each us experiences as reality; that reality is based upon our perception of reality. Further, “how we see what we see” is based on the way we choose to interpret what we see and experience.

The following excerpts are included below. Broadcast quality audio recording and transcript is freely available.

We are the DNA of Earth, Moon, Planets, Stars
We are related to the universal
Creator created creation
Spirit and intelligence with clarity
Being and human as power

There is a song recording of this poem called “These Memories.” Remembering how we are part of the memories of evolution re-roots our awareness of our origins and place in uni verse. Letting this understanding sink in, go deep, can liberate a wealth of postive, Life -respecting and -serving energy.

Going back 10,000 years, every human being today is descended from indigenous forebearers. This is equivalent to about 3,000 human generations. Today many human beings have forgotten what our collective ancestry signifies. Remembering who we are, and especially who our ancestors were and the fact that we are their descendants, can serve to reconnect our steps on the journey with what preceded us and what that means.

I mean this is the purpose of techno-logic civilization. They call it techno-logic for a very specific reason. This isn’t an accident, okay? You know, it truly isn’t. But the purpose of the civiliz[ation] – and so one of the civilizing processes is to erase memories. Alright?, to erase memories. Because we have ancestral memory. It’s encoded in the DNA – it’s a genetic memory.

You look at how techno-logic civilization – and everywhere that it goes, the longer it’s there, the more isolated the human beings – but they’re not called human beings, they’re workers and citizens, etc., alright? Alright? But the more isolated they feel, they no longer – you know, maybe they remember their grandparents or their great grandparents.

But see, you’ve got all that ancestral knowledge that’s encoded in the DNA, but it’s been cut off. So it can’t activate because if we’re not conscious that it’s there then we can’t – it just makes [things] difficult. See this is the memory that it’s very important for them to erase. Alright, and it’s about who we are – it’s memory of identity and self-reality.

And for every individual, encoded in our individual DNA, alright?, is the experience of our lineage from the very beginning. Whose whole perceptional reality was what I was just saying: all things have being, we’re made up of the Earth – all my relations, pray to spirits. See, and they didn’t pray to man or human form. The closest they came to it was they prayed to spirits that were called ancestors.

Alright? And because they were praying to those ancestors for help and guidance, they understood that we were borrowing today from the past and the future. We’re borrowing it from both places.

So the spiritual perception of reality was based upon that: we were the Children of the Earth, the Earth was our Mother. The Sky, the Sun and the Sky – these were our fathers. Alright, but this was – and our reality worked for us….

Because [with] a spiritual sense of reality you’re connected to everything man, you know, you’re connected. But in the religious perceptional reality, see, you committed a crime for being born, see you’re BLEEP forgettin’ here. [laughter] I didn’t make this up. And I’m not making it up now, alright? [applause]

And so anyway, in order to be – justify being here – to get to stay [laughter] – you had to submit to the male dominator chain of command, the authoritarian system. See, in this new religious reality[, it] said that, you know, well now there’s one god. The gods battled it out amongst themselves, see.

See I can’t envision, to me I’ve never been able to envision gods or goddesses. I can’t imagine the Creator in a human form. I mean no – you know, I can’t. And I think our road, our path to trouble started when we started to do it that way. Alright, you know, looking at the Earth as the Mother and these things, you know, call it a goddess, whatever, and this and that.

See, but I don’t go with god because I know that’s a limited perceptional reality. See, they forced it on us. But the trouble came see, when, when we decided that the Creator entity had a human form. See because then, that, that rationalized and justified mistreating the rest of the natural world.

Alright? I mean, sexism and racism came out of this perceptional change because once the Earth – you know under the new god thing, see, the Earth was no longer the Mother. The Earth was the property of this new god. And all god’s children – see god didn’t have a lot then, but they were very mean [laughter] so their numbers expanded through terror – see but god’s children was the – their job and objective was to subdue the Earth for this god.

So in order to achieve that objective they had to create sexism. See, sexism has got to do with how we live with the Earth. And racism, because now that the Earth was property, you know and all spiritual value was away, was away from the Earth, you know. Real spiritual value was now a religious perceptional thing, and, right, so it wasn’t all encompassing, it wasn’t just a part of the reality anymore.

So not a one of our people really went for this. Because it’s like, you know this is a major perceptional reality change. But anyway we committed a moral crime forgetting here, so now we had to submit to that world view.

To me, coherently to me, it’s clearly a blatant, a blatant, a very blatant perceptional altering how one perceives reality. I mean it’s brainwashing intensified at its maximum, right? Because our ancestors were forced to see life differently in order to remain just physically alive….

See now, again, I’m not making this up. You know, this did transpire. These things did happen. And they killed as many people as they could – I guarantee it – in order to get the other ones to submit. So they killed as efficiently as they could with the technology they had at their disposal at that time, alright? And because they created a rationalization as to why to do it, so it just became as efficient as they could do.

And at some point, the descendants of the tribes of Europe no longer knew what it meant to be a human being. They just didn’t know – they didn’t want to know. So the descendants of the tribes of Europe, in the end, had to love what they feared which was there to possess them. See, and I think it messed up love in a lot of ways, you know that they haven’t unsorted yet. You know, no offense, but …..

Our intelligence – as the human being part of all of this reality that’s going on, we were given intelligence, this is what was there to help us through the evolutionary reality – to ride the balance, so to speak, of the evolution with our intelligence. It’s our medicine, it’s our protection, it’s our self-defense.

Because this thing about life and death – you know, this techno-logic reality has been around for 3 or 4,000 years – I don’t know however long it’s been around, you know. But its whole reality is based upon death so therefore, at some point it must die. Our whole objective as human beings is to stay alive. Do you get it? I mean really alive. Not surviving and existing, I’m talking about alive. Connected to life and living. See, we have to outlast it because we can’t outfight it because its violence and its aggressive mindset, alright?, is beyond parallel.

But that doesn’t mean that it’s powerful. That just means that it’s violent and it’s aggressive and it’s without parallel and you better be damned careful of it. But that’s what that means, about power – our relationship to clarity and coherency and the use of our intelligence is our relationship to power and we can outthink it….

Your descendants and my descendants depend upon us, alright?, to keep the reality of the living alive. And we are going to influence the outcome, no matter what we do. So [what] I’m talking about is, well let’s take some responsibility, alright?, and let’s influence it in a more clear and coherent way. Outthink them. Trust ourselves and our ability to think. And each and every one of us was given just as much intelligence as we need. It’s not a contest.