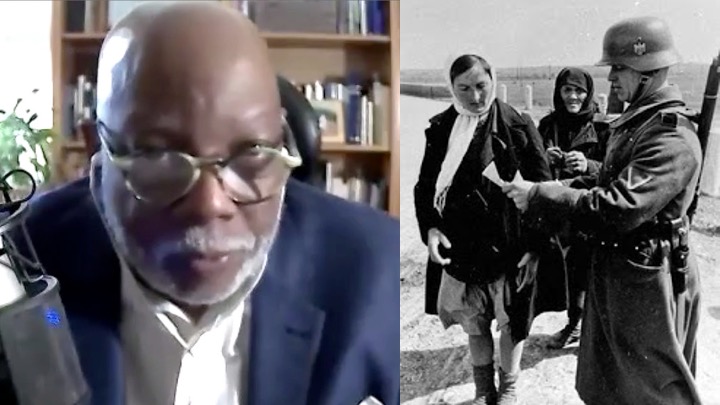 Junious Riccardo Stanton is the producer and host of From the Ramparts, The Digital Underground and the Akoben podcast: “I have been a writer and community broadcaster for twenty years. The Internet offers a wonderful medium to connect with Africans world wide and inform and exhort our people to actualize our innate genius and potential. Our minds hold the key to the quality and richness of our lives; engage in mental decolonization, lay the foundation for total liberation, free your mind, the rest will follow!”
See Also: Catherine Austin Fitts: Beyond Divide and Conquer with Junious Ricardo Stanton
“Junious and I discuss how the divide and conquer tactic, a key to military and intelligence strategies for millennia, is now being applied to a new set of domains. Whether it is gender, politics, or simply behaviors such as wearing masks and observing social distancing, divide and conquer tactics are an integral part of the economic warfare of the Going Direct Reset. The question is: How can we see the manipulation and go beyond this divisiveness? We’ll share practical tips that can help you preserve your sanity and build power, and help others do the same.”
Source of the following is Your Papers Please, 5 Apr 2021 at: https://fromtheramparts.blogspot.com/2021/04/

The Linux Foundation has partnered with IBM, the COVID-19 Credentials Initiative and CommonPass [a project of The Commons Project], a digital “health passport,” in order to develop vaccine credential apps that will be applicable globally. If the initiative is successful, you’ll likely be required to pull up a vaccine certificate on your phone showing when and where you were vaccinated, along with which type of vaccine, in order to get on a plane or attend an indoor event, such as a concert, for starters.

The “novel” Coronavirus named SAR-COV-2 and the efforts of governments, public health officials, Big Pharma promoted by the mass media ostensibly to mitigate its spread have wrecked havoc on the world. For over a year we have been inundated with conflicting stories about a virus that has been made to seem like it is the Bubonic Plague or Spanish Flu when all the available data on it shows nothing is further from the truth. See: https://www.worldometers.info/coronavirus/.

Algorithm predictions paid for by Bill Gates said five hundred thousand would die in the UK and two million in the US. The UN’s World Health Organization, the Johns Hopkins University Center for Health Security and almost two hundred world government leaders uncritically accepted these Gates’ funded predictions without question! It turned out to be a false alarm yet the media kept up a fear mongering campaign that has created enormous psychological distress, mass hysteria and maladaptive responses and reactions that are clearly proving to be worse than the virus! The following excerpt is from:

If, and to what extent, the world has been suffering from mass hysteria or mass psychogenic illness during the COVID-19 crisis is open to future research, even though some observers have made that claim. It is clear, in any case, that the population has been under tremendous psychological strain during the COVID-19 crisis. Especially lockdowns have contributed to a surge in anxiety and stress, which are important ingredients for the development of mass hysteria. In a survey conducted in the US from 24 to 30 June, 40.9% of participants reported at least one adverse mental health condition, and 10.7% reported to have considered suicide seriously in the last 30 days. Additionally, the frequency of alcohol consumption during lockdowns increased 14% in the US. At least some anecdotal evidence points to the possibility of mass hysteria as manifested by the hoarding of toilet paper and other essentials, the masked driving of single persons in their cars, and people virtually not leaving their houses, not even for a walk, even though the risk of being infected outdoors with physical distancing is minuscule. Similarly, some people have been scared by SARS-CoV-2 to an extent not easily explainable by their own miniscule risk of death from it.[Ioannidis, J. Infection fatality rate of COVID-19 inferred from seroprevalence data. Bulletin of the World Health Organization doi: 10.2471/BLT.20.265892. 2021, 99, 19F-33F. local PDF]

To make matters worse, the pharmaceutical industry rushed to develop and market experimental “vaccines” in record time, skipping extensive animal and human trials, gaining government emergency use authorization under cover of indemnity against lawsuits; meaning you cannot sue them if you or a loved one suffers major injury or death! These experimental injections are being paid for by our taxes! To add insult to injury you are not allowed to even question their safety or offer any alternative therapeutic treatment options other than experimental injections! These “vaccines” have been deemed “safe and effective” not by science but by government, Big Pharma and media fiat.

Now governments, self-appointed unelected technocrats and non-scientist bureaucrats are plotting and working to mandate “vaccine passports” designed to limit where and how we travel, trace and track everywhere we go under the guise of “public health security”. It’s just like after 9-11 when the US government passed and enacted legislation that had been written well before 9-11—specifically the USA PATRIOT ACT and the NDAA—that have transformed society into a not so benign police state ostensibly to “protect” us from terrorists and Jihadist bogymen (many who were on the US CIA payroll). These laws chipped away at people’s civil rights and protection under the law. Speaking of terrorists and loss of liberties, how come the US government is now conflating dissent or disagreement with “domestic terrorism”? We are now all viewed as potential carriers and spreaders when such a notion is so unscientific it’s laughable.

Now global governments, technocrats and the media are colluding to use biometric and face recognition technology to track us, trace our every movement and determine where we go and what venues we can lawfully enter. https://childrenshealthdefense.org/defender/global-vaccine-passports-scary-whats-next-2/

This is like Nazi Germany, but their real goal here is to be like China and implement a version of communist China’s facial recognition and multi-faceted digitalization technology to keep track of our every move and transaction (What’s wrong with China’s Social Credit System?, Marko Kovic, Zurich Institute of Public Affairs Research, 15 Apr 2019).

Why? When has this ever been done as a treatment therapy for a pandemic? What has injection passports and tracking got to do with preventive measures for a virus that has a 98% survival rate?! This is serious food for thought.