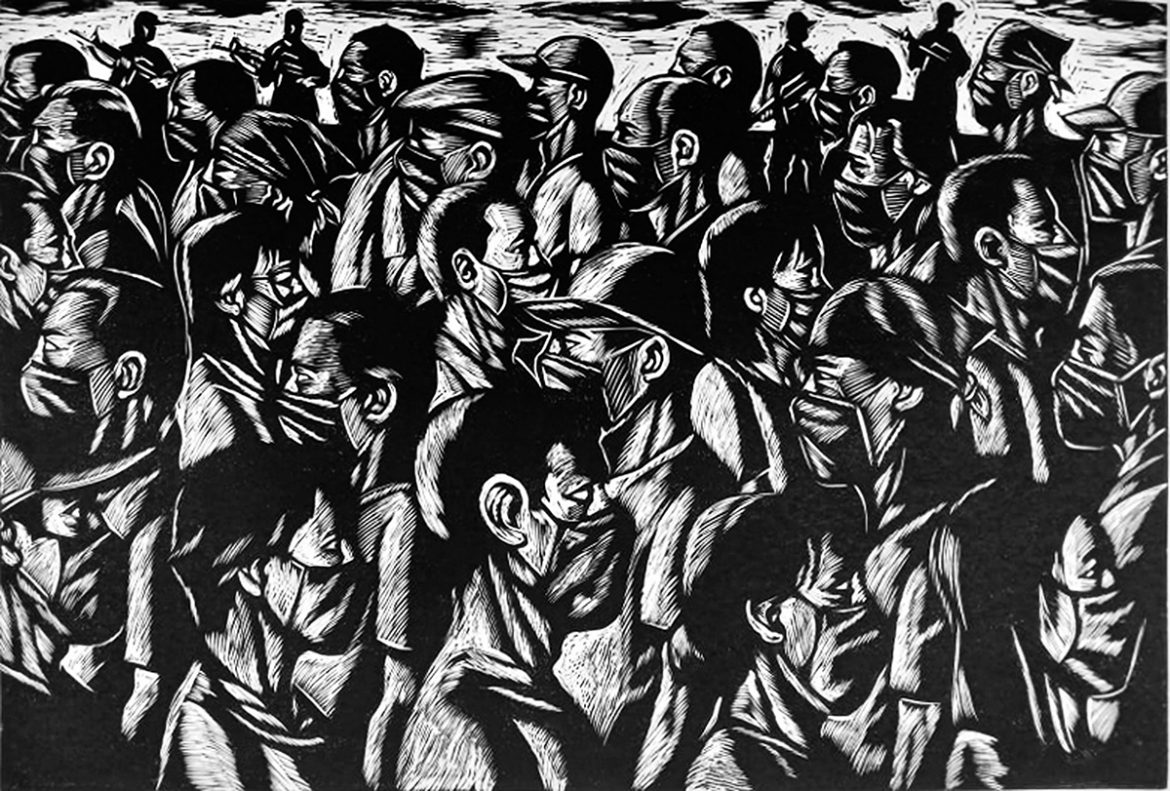 “For the first time in my life I was reading things which had not been approved by the Prophet’s censors, and the impact on my mind was devastating. Sometimes I would glance over my shoulder to see who was watching me, frightened in spite of myself. I began to sense faintly that secrecy is the keystone of all tyranny. Not force, but secrecy . . . censorship. When any government, or any church for that matter, undertakes to say to its subjects, “This you may not read, this you must not see, this you are forbidden to know,” the end result is tyranny and oppression, no matter how holy the motives. Mighty little force is needed to control a man whose mind has been hoodwinked; contrariwise, no amount of force can control a free man, a man whose mind is free. No, not the rack, not fission bombs, not anything—you can’t conquer a free man; the most you can do is kill him.”
—Robert Heinlein, Revolt in 2100, 1949

Censorship is  hastening a global conclusion of Electric Civilization (E.C.) as currently configured. Alphabet Inc that owns Google that owns Youtube is a player in the corporate empire state hegemony implementing what now falls under the rubric of the Great Reset [†][‡], the Fourth Industrial Revolution, as well as the United Nations Sustainable Development Goals. The lethal effect of censorship, running rampant as never before in our E.C. epoch—crushing and eliminating open debate,  freedom of speech, freedom of thought, and the free exchange of ideas and perspectives—is far more destructive to human life than SARS-CoV-2 will ever be.

While my experience of this effect might be comparatively trivial, the consequent implications underscore what is occurring to the covenant claimed within U.S. Constitutional freedoms and inalienable rights, formerly guaranteed by the Declaration of Independence. Canadian lawyer Rocci Galati described what we are dealing with in this way:

[A]s a Constitutional Lawyer, when I am asked, “What do you do?” I simply in a word say to them, “I protect human attributes and humanity.” The framers of the U.S. Constitution had it right when they talked about inalienable rights, meaning the rights that were given to you by your Creator, even if you believe your creator is just your mother.

I have made annotated text transcripts of video recordings for a long time . Some time ago youtube began producing automatically-generated raw text transcripts.  In December this functionality was employed to make a transcript of the CSPAN recording of Dr Peter McCullough focusing mostly on the efficacy of Hydroxychloroquine :

In January I started the same process for the December testimony by Dr. Pierre Kory before the same Senate Committee, again recorded by CSPAN. Beginning in the usual way, a mp4 film file was uploaded to a youtube channel and defined as Unlisted since I only use it to leverage raw text generation from which to begin making the transcript.

A “Warning” had been previously received from youtube that another uploaded film was in violation of youtube’s guidelines. Unlike the recording of Dr McCullough, this time I was met with the following image of a referee informing me “Your content was removed due to a violation of our Community Guidelines / Your channel now has 1 strike. You won’t be able to do things like upload, post, or live stream for 1 week. A second strike will prevent you from publishing content for 2 weeks.” 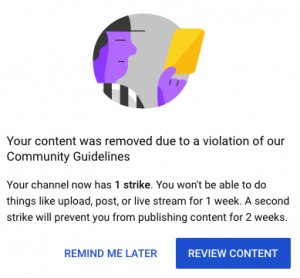 Clicking on the [Review Content] button I was informed the C-SPAN recording was  “Medical misinformation” (click image to view full size): 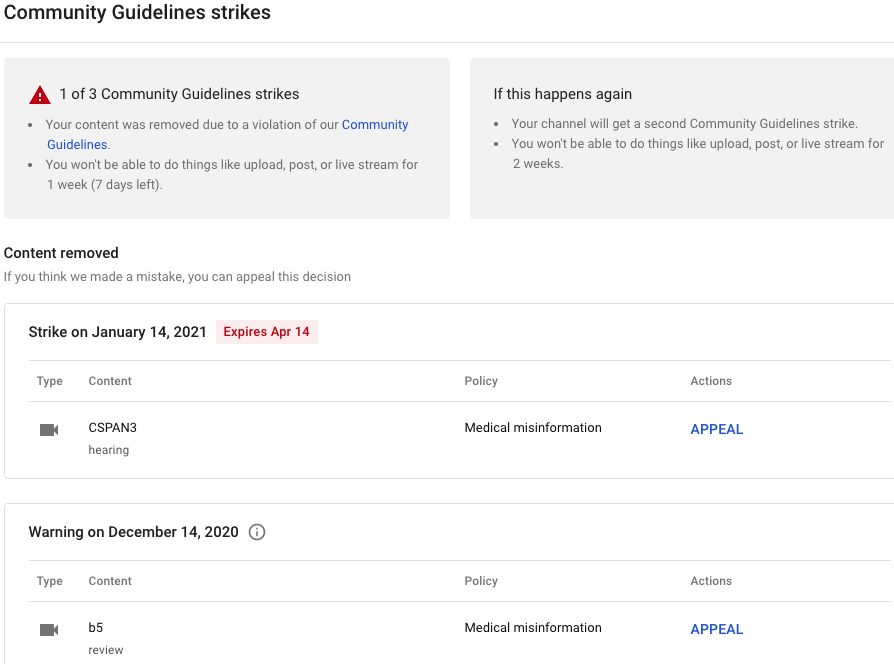 Given the above statement, “If you think we made a mistake, you can appeal this decision”, I sent the following (from which a response has never been received ):

This is the 8 December 2020 C-SPAN broadcast of “Medical Response to COVID-19” from the United States Senate Homeland Security and Governmental Affairs Committee, source at: https://www.c-span.org/video/?507035-1/medical-response-covid-19
Justifying removing this film so that “YouTube is a safe place for all” asserts the falsehood that human beings in the United States are no longer a free and sovereign people possessing liberty and independence to study and confer about what is discussed in the United States Senate chambers regarding federal government policies. Such censorship is the death knell of the United States Constitution.

Ignoring the absurdity of “Strike 1” I went ahead and made the annotated transcript to produce of the following:

Dr Pierre Kory Testimony
Senate Homeland Security Committee Hearing on Medical Response to COVID-19
Senator Ben Johnson (R-WI), Chairman
December 8, 2020
Dr. Kory spoke on behalf of the Front Line COVID-19 Critical Care (FLCCC) Alliance on the efficacy of Ivermectin presenting data showing it is “an effective treatment against this pandemic.”  This hearing, conducted in U.S. Senate chambers, provides life-affirming and life-giving information regarding intelligent use of re-purposed drugs “based on mountains of data” to aid people afflicted with Covid-19 as described by Dr. Kory:

I am here again today with a new recommendation. In the last nine months in our review of all of the literature as a group—again we are some of the most highly published physicians in our specialty and the world—we have done nothing but try to figure out how to identify a repurposed and available drug to treat this illness. We have now come to the conclusion, after nine months—and I have to point out, I am severely troubled by the fact that the NIH, the FDA and the CDC, I do not know of any task force that was assigned or compiled to review repurposed drugs in an attempt to treat this disease. Everything has been about novel and/or expensive pharmaceutically engineered drugs, things like tocilizumab and remdesivir and monoclonal antibodies in vaccines.

We have [one] hundred years of medicine development. We know, we are expert in all the medicines we use, and I do not know of a task force that has been focused on repurposed drugs. I will tell you that my group and our organization, I will say that we have filled that void. That is all we have done, is focused on the things we know and things we do.

I’m here to tell you, Dr Rajter, he just presented. He has one study of the many that I want to talk about. I want to talk about that. We have a solution to this crisis. There is a drug that is proving to be of miraculous impact. And when I say miracle, I do not use that term lightly. And I don’t want to be sensationalized when I say that. That is a scientific recommendation based on mountains of data that has emerged in the last three months.

When I am told, and I just heard this in the opening sentence, that we are touting things that are not FDA or NIH recommended, let me be clear: the NIH, their recommendation on ivermectin, which is to not use it outside of controlled trials, is from August 27th. We are now in December. This is three to four months later. Mountains for many centers and countries around the world showing the miraculous effectiveness of ivermectin. It basically obliterates transmission of this virus. If you take it you will not get sick.

Big Tech exercising private power to delete a recording of this is creating what Robert Heinlein warned of 70 years ago: “the end result is tyranny and oppression”. At issue is the bedrock of what the United States Constitutional system of law stands for.  What does it say about checks and balances in this system of law when sworn testimony in a United States Senate hearing is unilaterally determined to be “Medical misinformation” not by Federal Legislative oversight but by a private corporate entity? And further, that said private corporate entity now has the unchecked and unaccountable power to censor and remove a recording made by C-SPAN, a non-profit public service which, as stated in its Our History overview:

Forty years ago, C-SPAN first put the U.S. House of Representatives on television, opening a window for viewers to get an unfiltered view of government. While Washington may have changed, we haven’t. Our unblinking eye on Congress and public debate continues. The window is still open, giving the world a front-row-seat to democracy – allowing you to make up your own mind.

This extinguishment of basic freedoms enshrined in the Bill of Rights can not be allowed to stand.  If this is not confronted and reversed we will all be complicit as Martin Niemöller was, notwithstanding his famous post-WWII statement. [See:  The Origin and Reception of Martin Niemöller’s Quotation, “First they came for the communists…” by Harold Marcuse, Chapter 11 from Remembering for the Future, Armenia, Auschwitz, and Beyond, Berenbaum, Libowitz, Littell, editors, 2016]