Are We Being Told the Truth About COVID 19?
Triggernometry Interview with Prof Sucharit Bhakdi

This film was published in the first half of November at: https://www.youtube.com/watch?v=ZnpnBYgGARE. On 26 Nov 2020 it was still listed on https://web.archive.org/web/20201126161641if_/https://www.youtube.com/c/Triggerpod/videos and, in its approximately 2 week run, had garnered 537K views. Since then it has been censored by the Brain Police, minions of Alphabet Inc that owns Google that owns Youtube. The lethality of censorship in 2020—censorship of open debate, of freedom of speech and the exchange of ideas and perspectives—is far more destructive to human life than SARS-CoV-2 will ever be.

Asked at the end of the interview, “What’s the one thing we’re not talking about that we really should be?”

Dr. Bhakdi replied: “We should be talking about why and how has our society allowed these things to happen? How and why? And we must try to get answers to those so that this will never happen again.” 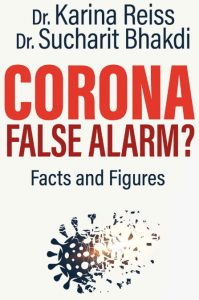 Dr. Sucharit Bhakdi and Karina Reiss, Ph.D. are authors of the book, Corona False Alarm? Facts and Figures. Originally published June 2020 in German, the English translation was published in October.

Sucharit Bhakdi was born in Washington, DC, and educated at schools in Switzerland, Egypt, and Thailand. He studied medicine at the University of Bonn in Germany, where he received his MD in 1970. He was a post-doctoral researcher at the Max Planck Institute of Immunobiology and Epigenetics in Freiburg from 1972 to 1976, and at The Protein Laboratory in Copenhagen from 1976 to 1977. He joined the Institute of Medical Microbiology at Giessen University in 1977 and was appointed associate professor in 1982. He was named chair of Medical Microbiology at the University of Mainz in 1990, where he remained until his retirement in 2012. Dr. Bhakdi has published over three hundred articles in the fields of immunology, bacteriology, virology, and parasitology, for which he has received numerous awards and the Order of Merit of Rhineland-Palatinate.

Near the end of the book is the observation:

It has been almost 90 years since the time when critical and free journalism was abolished and the media transformed into the extended arm of the state.

It has been almost 90 years since the time when freedom was abolished and opinions of the public were forced into the political line.

It has been almost 90 years since the last media-driven mass hysteria.

If we have learned just one thing from the darkest times of our German history, then surely this: We must never again be indifferent and look the other way. Especially when the government suspends our fundamental democratic rights. This time, it was only a virus that knocked on our door, but look what we had to go through as a consequence:

If that does not remind you of a dictatorship then you must have been sound asleep during your history lessons. The things that remain with us are deep concern and fear. Because so many intelligent and educated people became like lemmings within a short 3 months, willing to obey the demands and commands of the world elite.

The renowned virologist Pablo Goldschmidt said: “We are all locked up. In Nice there are drones that impose fines on people. How far has this monitoring gotten? You have to read Hannah Arendt and look very closely at the origins of totalitarianism at that time. If you scare the population, you can do anything with it.”

Apparently, he is right. One thing is clear: there are many things that should be worked through and we should all insist upon this happening. The coronaviruses have retreated for this season, the issue is disappearing from the headlines and from the public sphere – and soon it will be gone from peoples’ memories.

If we, the people, do not demand that all transgressions of the coronavirus politics are addressed, then those in power will be able to cover it all with a cloak of concealment.

The final section is A Farewell:

Respiratory viruses are a major cause of mortality worldwide, with an estimated 2-3 annual million deaths. Many viruses including influenza A viruses, rhinoviruses, respiratory syncytial virus (RSV), parainfluenza viruses, adenoviruses and coronaviruses are responsible. Now, a new member has joined the list. As with the others, the SARS-C0V-2 virus particularly endangers the elderly with serious pre-existing conditions. Depending on the country and region, 0.02 to 0.4% of these infections are fatal, which is comparable to a seasonal flu. SARS-C0V-2 therefore must not be assigned any special significance as a respiratory pathogen.

The SARS-C0V-2 outbreak was never an epidemic of national concern. Implementing the exceptional regulations of the Infection Protection Act were and still are unfounded. In mid-April 2020, it was entirely evident that the epidemic was coming to an end and that the inappropriate preventive measures were causing irreparable collateral damage in all walks of life. Yet, the government continues its destructive crusade against the spook virus, thereby utterly disregarding the fundaments of true democracy. And as you read these lines, human experiments are underway with gene-based vaccines whose ominous dangers have never been revealed to the thousands of unknowing volunteers.

We are bearing witness to the downfall and destruction of our heritage, to the end of the age of enlightenment.

May this little book awaken homo sapiens of this earth to rise and live up to their name. And put an end to this senseless self-destruction.