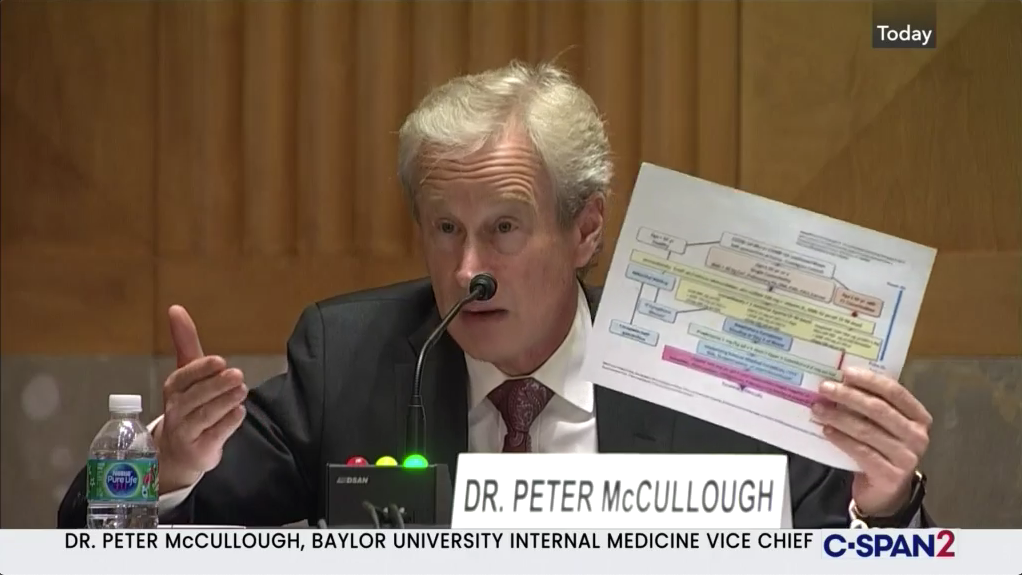 This is a partial transcript of Dr Peter McCullough testifying on 19 Nov 2020 before the Senate Homeland Security Committee Hearing on COVID-19 Outpatient Treatment. Dr McCullough is the current Vice Chair of Internal Medicine at Baylor University Medical Center and a Professor of Medicine at Texas A&M College of Medicine.

Peter A. McCullough, MD, MPH is board certified by the American Board of Internal Medicine in internal medicine and cardiovascular disease. He has extensive training and expertise in lipidology and echocardiography. He holds additional certifications from the American Board of Clinical Lipidology and the National Board of Echocardiography. Dr. McCullough specializes in treating patients with complicated internal medicine problems that have affected important organs including the heart and kidneys. After receiving a bachelor’s degree from Baylor University, Dr. McCullough completed his medical degree as an Alpha Omega Alpha graduate from the University of Texas Southwestern Medical School in Dallas. He went on to complete his internal medicine residency at the University of Washington in Seattle, a cardiology fellowship including service as Chief Fellow at William Beaumont Hospital, and a master’s degree in public health at the University of Michigan. Dr. McCullough oversees cardiology training, education, and research for Baylor Health Care System and is Vice Chief of Medicine at Baylor University Medical Center at Dallas. He is an internationally recognized authority in his field and frequently lectures on internal medicine, nephrology, and cardiology. In addition, he has published over a thousand related scientific communications. He is currently serving as the chair of the National Kidney Foundation’s Kidney Early Evaluation Program, the largest community screening effort for chronic diseases in America. As both a primary care physician and specialist, Dr. McCullough welcomes patients with complicated internal medicine problems that have affected important organs including the heart and kidneys. He is knowledgeable about the roles of diet and exercise in health and disease and commonly provide guidance concerning dietary supplements and treatments for obesity. He has an intimate practice style with frequent patient contact and 24 X 7 access for questions and help with medical problems. His practice involves both teaching and research, therefore, his patients are among the first to have new tests and treatments for high cholesterol, high blood pressure, diabetes, and heart and kidney disease. Dr. McCullough is on the medical staff at Baylor University Medical Center, Baylor Jack and Jane Hamilton Heart and Vascular Hospital, and The Heart Hospital Baylor Plano. He is also on staff at Baylor Heart and Vascular Institute which promotes cardiovascular research and education.

Dr McCullough: Senator I want my testimony to clearly recognize—be on the record that I think Dr Jha’s testimony is reckless and dangerous for the nation and his comment regarding the poison control reporting is exactly what Dr Peters is interested in. You’re interested in misinformation regarding covid.

When it was used—and we had 500,000 dose administrations of hydroxychloroquine, the Poison Control Center received, I think the number was, 77 additional calls. And when the reviewer looked at it, [for] two-thirds of them, somebody took an extra dose and they were concerned. So it boiled down to 17 cases out of over 500,000 administrations. And yet Dr Jha holds that up to the American public as a scare point, to scare the public away from a safe and effective therapy for Covid 19.

And as you mentioned I had it myself. I’m 57. I’ve got asthma, I’ve got atherosclerotic cardiovascular disease. I can tell you Senator Peters, I was not falsely reassured sitting at home. Believe me, when I got that test result I was terrified. And every American is terrified. Every older patient with heart and lung disease, when they get the report, they’re not falsely reassured and sit at home, think this is going to be a picnic. They are scared to death and by the time they come to the hospital it is frank terror because they know they’re going to be isolated, they’ll never see their family members again.

What did I do? I did the right thing. I got myself rapidly into a FDA approved treatment protocol through a study. Hard to do by the way because the government offers no resources to the public to quickly get into clinical trials. I got into a clinical trial. I took hydroxychloroquine as part of a multi-drug sequence program which is exactly what’s in the peer-reviewed literature which is the framework of how Americans should be treated. 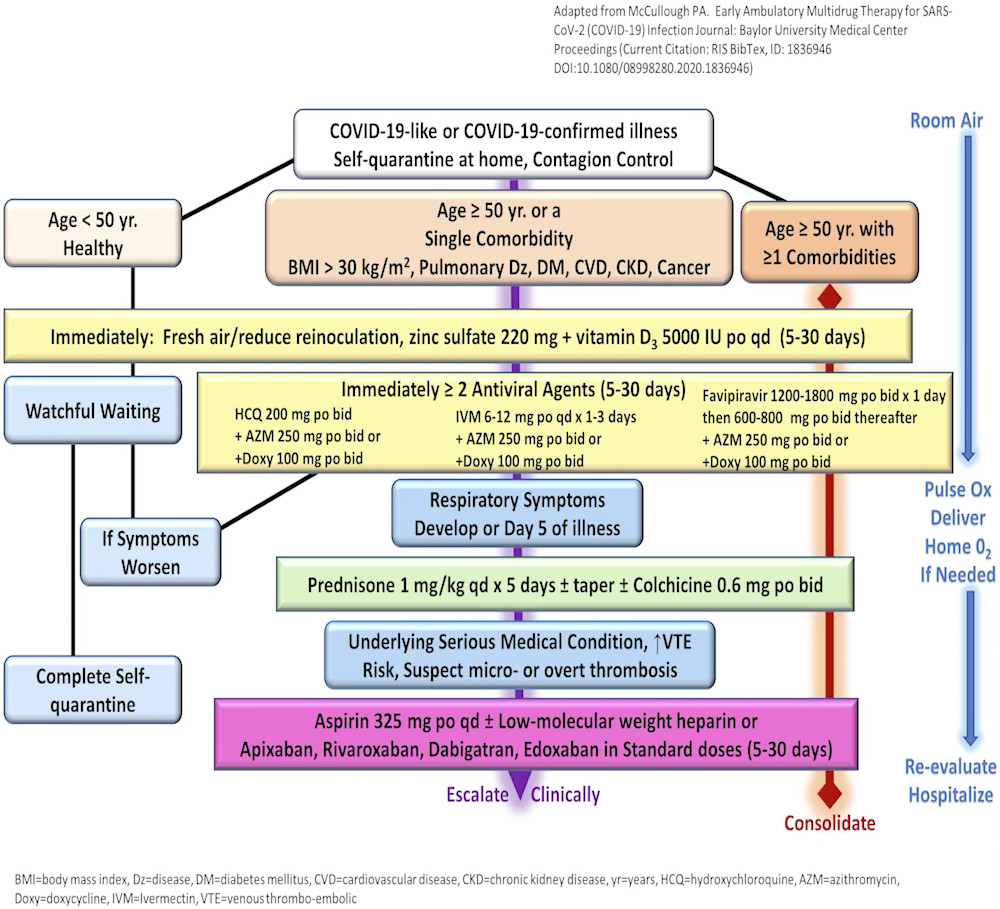 I was a few days behind in recognizing what was going on. The virus got into my lungs. I had pulmonary involvement and I got anxious. I got to the point where I thought maybe I could be hospitalized and I can tell you firsthand this cocktail of drugs works for sure but hydroxychloroquine dose by dose, settles down that fever, settles down, reduces the amount of the severity, intensity of symptoms and by that mechanism that’s the reason why hydroxychloroquine reduces hospitalizations and death.

When patients get anxious and they can’t breathe anymore they go to the hospital. So this isn’t complicated. There’s over a hundred studies. They are all supportive. The EUA says when the preponderance of evidence shows the drug works and has acceptable safety we ought to go. My view is we need to go with this on everybody high risk in America….

Senator Johnson: What didn’t necessarily have to take time was using off-the-shelf drugs for early treatment. But yet somehow, I guess it’s because President Trump allowed the word hydroxychloroquine to flow off his, you know, out of his mouth, all of a sudden that was attacked and that was poisoned and we never ever had the NIH, CDC, FDA put their full weight behind an investigation of that—the full clinical trials—I was pushing, I was pushing for that. Not pushing hydroxychloroquine. Pushing for the science, for studies. But it never happened because, again, it was censored. We talk about disinformation. Not providing the public information is disinformation as well.

So again why I fault the agencies is because they they turned a blind eye toward simple, cheap, possibly effective treatments that by the way created no harm. Dr Risch, I think you mentioned and I’ve got a lot to go over here, you mentioned that the non-randomized trials, I guess we’d call that observational studies, real world experience, really involving thousands of patients, indicated that there was a 50% reduction in hospitalization deaths. In the Saudi Arabian study, five time reduction. Now let’s let’s just assume that that’s true. I think we can also take a look at the billions of doses a year that are prescribed of hydroxychloroquine. Any member of Congress has gone to Africa, they’ve just been handed hydroxychloroquine as an anti-malarial. We treat lupus, we treat rheumatoid arthritis. We don’t give EKGs before that.

The studies I saw early on were designed to fail on hydroxychloroquine, late in treatment when people are basically ready to die or when their heart was already affected by the virus. Of course hydroxychloroquine does have an impact on arrhythmia at that late stage but not early which is when it was being recommended—for early use, first five days. So when you take a look at the risk-reward, now that these other observational non-randomized trials have been—or studies have been—conducted, 50% or five-fold reduction in death and hospitalization versus the almost infinitesimal risk of hydroxychloroquine and zinc? This has made no sense to me what so ever. The only explanation is the politicization of it which I opened up my opening comments saying that has been what’s such a shame.

I do want to—before I forget—I received a letter and an article from the Economic Standards submitted by Dr Stephen Hatfield. The letter kind of explains what I have known about a whistleblower, Dr Rick Bright, who was asked by his superiors to work on establishing a FDA expanded access investigational new drug protocol. But by his insubordination, he instead went to Janet Woodcock and people in the FDA and got the Emergency Use Authorization. Which sounds like, Hey we’re going to expand the use of this. No, he dramatically restricted the use of hydroxychloroquine—only in hospital. What I think we all recognize is probably not particularly effective, possibly dangerous and only out of the national stockpile. He knew what he was doing. That’s what poisoned the well. That’s what created what I’ve called the prescription log jam here on hydroxychloroquine or early—and I think it affected all early treatment options. It took them off the table. We took our eye off the ball. That’s why I say our agencies failed us. These individuals in these agencies failed us.

And here’s the question I want to ask for you Dr McCullough because you mentioned this. The circle of empathy. Can you just talk about how you described that to me before the hearing?

Dr McCullough: Let me just say before I answer that that this is not just a government culpability and malfeasance with respect to hydroxychloroquine. This is academic malfeasance. There were two fraudulent papers, one in the New England Journal of Medicine [18 June 2020], one in Lancet [22 May 2020], published by individuals interested in doing evil to the world with respect to a beneficial treatment of hydroxychloroquine. In an unprecedented manner these two manuscripts were withdrawn after two weeks where they could scare the public and the world’s physician audience. Since that time there have been dozens of fraudulent papers—

Senator Johnson: Re-emphasize that. They were then withdrawn.

Dr McCullough: They were withdrawn and the New England Journal of Medicine and Lancet acknowledged that they were fraudulent papers. They were scare papers, to scare people on hydroxychloroquine. Since that time there’s been dozens of pile-on scare tactics in academics. This isn’t the government. This is people in my field, in academic medicine who are committing academic fraud.

So academic medicine is committing a fraud, is committing, I think, a crime against humanity. There must be a motivation behind this that’s much bigger than just democrat versus republican. I am extremely concerned, honestly, about the the academic contribution to scare tactics in the world. Now it’s not working everywhere. In India it’s given first line and India is such a crowded country. I’ve been there myself. Their deaths per million population is a tiny fraction of America.

Dr McCullough: Right. We have nearly 800 deaths per million population in the United States and we’re all spread out. In India, they’re on top of each other, they have less than 100 deaths per million population. The leading doctor in India is willing to come testify to the United States and tell you the reason why. They have tons of Covid. It’s spreading over like crazy. But they’re treating it at home with hydroxychloroquine and other drugs. Remember, it’s a multi-drug program probably about four or so drugs plus supplements and they’ve handled the infection.

Every country that is actually having a reasonable public health response is treating this problem at home. Now none of these drugs are a cure. But they allow the patient to get through the illness like myself. I missed 10 days off of work and I returned to the workforce. I didn’t get in the hospital for four weeks. They allow people to stay at home and not go out and contaminate other people. My wife and I got it at the same time and because we were treated at home we were actually able to stay at home so we didn’t contaminate other people.

The current program—that’s supported by the minority witness and the National Institutes of Health and all government bodies—is that patients go home, they get no help whatsoever, doctors are not supposed to treat them, they go out in a panic to Urgent Cares and ERs, contaminate more people and then they’re hospitalized and die. America has to wake up right here right now. We are getting buried and we need home treatment.