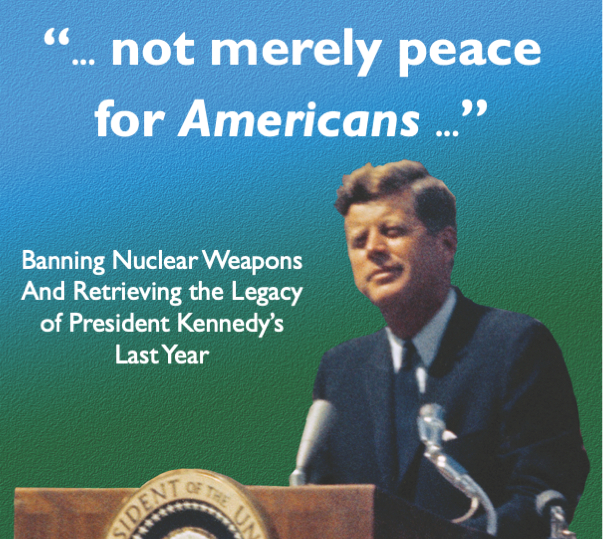 56 years ago on 10 June 1963 President Kennedy gave the Commencement Address at American University. His focus was “the most important topic on earth: peace” and includes the inescapable reality of our species’ oneness:

…in the final analysis, our most basic common link is that we all inhabit this small planet. We all breathe the same air. We all cherish our children’s futures. And we are all mortal.

Calling for an end to the Cold War, the intelligence, logic, and coherent thinking of this speech was then, and is still now, ahead of its time.

A new pamphlet with the above title has been published on 10 June 2019 and includes consideration of grasping and applying the iron logic of the nuclear age.

The logic of this situation is: “What we do to the other, (in this case Russia) will be done to us.” If this is the case, then we must do unto them as we want them to do unto us. The moral imperative “Do unto others as you would have them unto you” has become a practical necessity….

[I]s it possible that what is being revealed to us is the fallacy that security can be found in domination—dominating other people, dominating other nations, dominating nature? If what we do unto others will be done unto us, then in the end we and the other are not separate. What we are doing to others, we are doing to ourselves. An awareness of this reality can be the basis of an awakening in our thinking, feeling and imagination, an awakening of our actions informed by a new sense of human solidarity and collective responsibility….

If we want other countries to forgo trying to achieve security through acquiring nuclear weapons, are there other ways to help them be more secure? In the midst of the looming danger of climate change, imagine how nuclear disarmament and disarmament in general might affect our world. By relinquishing the quest for security through destructive power and developing an international framework for security based on peaceful cooperation, might we develop the social institutions, the spiritual perspective, and the material resources to get out of the nuclear war we are in and deal with the threat of climate change?…

In our quest for a different vision and path for the United States and the world, it is critical to educate ourselves about a twelve month period from the fall of 1962 until the fall of 1963, when President John F. Kennedy was assassinated. Very few are aware of this year in US history. It was during this twelve month period that the United States took a fundamentally different approach to the ‘Cold War,’ nuclear weapons, nuclear war, and the conflict with what was then the Soviet Union. This was the result of a radical change in US policy, because of the dramatic shift in President Kennedy’s thinking after he had endured the Cuban Missile Crisis. During this period President Kennedy publicly displayed an understanding of much that is being said in this pamphlet and began to implement this thinking by turning it into policy.

By understanding the concerns of the leaders of the Soviet Union and their people and expressing that understanding in words and actions, President Kennedy was able to recruit a similar reaction from the other side. In this brief period we can see clearly how instead of the United States and the Soviet Union viewing each other as evil empires and enemies, they began to see each other and work together as partners in survival.

In order to understand President Kennedy’s thinking, we must turn to a speech he gave at American University on June 10, 1963.

In this speech Kennedy discussed the challenges of peace in the nuclear age. Anyone concerned about pursuing this partnership for our survival should read, or listen to, or watch this speech, While Kennedy was speaking about US relations with the Soviet Union, his insights are just as relevant today in regard to US-Russia relations….

We urge you to think about what has been said here, and not turn away. Study President Kennedy’s speech and see to it that family and friends do so also. This is not something any of us can face alone. We must face it together. Today the struggle to ban nuclear weapons is perhaps the leading edge of the peace movement, but the struggle for peace is complex and the forces behind nuclear weapons and war in general are powerful. If we cherish our children’s future, we must take up the challenge.

The pamphlet encourages readers to meet in groups, become conversant with the materials presented and engage in multiple strategies to work for the abolition and dismantling of all nuclear weapons as well as fulfilling the final portion of the objective stated in Article VI of the Nuclear Non-Proliferation Treaty, “complete disarmament under strict and effective international control.”

The complete pamphlet is available online here: ratical.org/ban-n-weps. It is also available in printed form by sending e-mail to: peacetaskforceFCCPR@gmail.com.